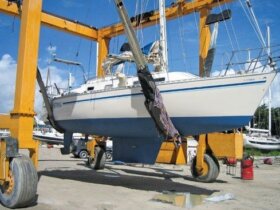 Top Tips for Selecting a Boatyard

Platypus Marine Inc. of Port Angeles, Washington is pleased to announce that Richard Liepelt has joined their growing company as a project manager. Capt. Charlie Crane, Sales/Marketing Director, said: “Richard’s extensive educational background and experience as a project manager on sailing and motor yachts as well as commercial fishing vessels makes him a perfect fit for our company.”

A lifelong passion for boats began for Richard as a boy when he spent many of his summer days sailing aboard the family’s twenty-six foot Danish Folk boat exploring Lake Washington in Washington State. As a teenager, he combed the Seattle waterfront seeking odd jobs swamping out bilges, scraping and painting pleasure craft and learning the intricacies of sail rigging. Richard recalls reading the National Geographic story of Robin Lee Graham’s five-year journey of sailing around the world on the 24-foot Lapworth sloop, Dove. “After reading about his experiences I knew then my life’s work would center around the maritime industry. For weeks after that, every free moment was spent in a boat dealer’s showroom or dockside clambering aboard their vessels dreaming of the day I could set sail on the world’s oceans.”

His first full-time job was commissioning Flying Dutchman Yachts, after which he attended the Trident Nautical School in Seattle and signed on with Atlantic Richfield as a seaman aboard the Arco Juneau transporting crude oil from Valdez, Alaska to west coast refineries. Richard moved on to Gomper’s Boat Building School where he learned the complex details of design and construction of traditional boat building and hull lamination. He also attended Palomar College in San Marcos, California studying fine woodworking under the tutelage of the world renowned furniture designer, Ian Kirby.

In his thirty-year career, Richard has worked with some of the most highly regarded naval architects and interior designers in the Industry, including Jack Hargrave, Jay Minor, Ward Setzer, Doug Sharp, John Munford and Adam Lay. He also worked for a Boats International Super Yacht Society Judge as his representative on a major refit of his own yacht. When the gentleman decided to build a new super yacht for himself he again called upon Richard to be his representative. A few years ago the actor Nicholas Cage called upon him to be his representative for the interior modifications for one of his yachts, and Richard continues his involvement with Nick’s vessels to this day.

For all of Richard’s impressive credentials, he is a low-key and personable professional whose unrivaled eye for detail and desire to pursue perfection puts his services in great demand. Jud Linnabary, President of Platypus Marine, said: “We have been aware of Richard for quite awhile now, and when he recently completed a two and one-half year project at Delta Marine we got together. It turns out that we shared a lot of the same visions about our industry, and we couldn’t be happier about his decision to join our company.” Jud went on to say, “He hit the ground running and went right to work on the S/Y Galatea, a seventy-six foot Palmer Johnson ketch that is having all exterior surfaces refurbished. Watching his methodical approach on this project bolsters my confidence that we have the best people in the finest commercial boat and yacht repair facility in the Pacific Northwest.”