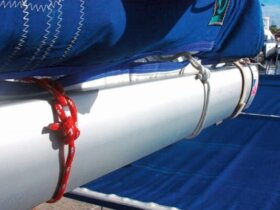 Koen Altena (22) and Erwin Herbert (21), two Dutch marketing students, completed their final project research on the lower Caribbean yachting industry recently, with most significant findings about the sector in Grenada, Trinidad, Venezuela, and Curacao. They are willing to share the obtained information with all stakeholders in the Caribbean yachting industry. The results are both beneficial and intriguing for future investments in the region.

In brief, the main results of the research outline in detail such facts as the spending patterns, interests, traveling patterns, and specific wants and needs of target yachting groups in the lower Caribbean sailing on boats between 35 and 50 ft.  According to the research report, these boaters spend $2200 dollars each month, form a clear own community consisting of 48% North Americans and 42% Europeans, and are mostly heading west.

Such information could be both relevant and lucrative in the future of the yachting industry. Furthermore, the report carefully outlines the similarities and differences between the islands of the lower Caribbean. The in-depth analysis shows both the strengths and weaknesses of the various islands in developing more growth.

As the vastly growing yachting industry in Curaçao was the main target, some results and conclusions for Curaçao follow:

Growth
The growth of Curacao as a yachting destination started back in 2004 when a few yachting facilities started to expand. Yacht owners began to see Curacao as a hurricane-free destination where their yachts could be serviced as well. This caused the number of yacht arrivals to grow up to 35% per year.

Yachting tourists
The market on Curacao is right now mostly dominated by yacht owners who travel to the west of the Caribbean.  Those who do plan to go west pass by Curacao on their way. That is why it is not very difficult to convince such yachtsmen to stay in Curacao for the hurricane season, as long as there are yacht services available to meet their needs.

Continuation of growth
To assure the continuation of the growth of Curacao the following targets are formed:
*Yachtsmen have to know that Curacao is a hurricane free and safe yachting destination with high quality yacht services for both storage and maintenance/repair. Besides this, it has excellent supermarkets and an overwhelming underwater world.
*Make Curacao more known among the yachtsmen. Yachtsmen are unfamiliar with Curacao as a yachting destination at the moment. Around 31% of the yachters surveyed declared that they do not even consider Curacao as an alternative. They know nothing about the island as a yachting destination.
*Yachtsmen have to see and understand that it is not that difficult to sail back to the island chain from Curacao. There are two possibilities—the northern route and the route via the Venezuelan islands.
*The best way to get in touch with yachtsmen is by word-of-mouth. In other words, it is imperative to build up a positive reputation for Curacao based purely on positive experiences. Cruising guides are another important information source for yachtsmen. The above stated recommendations should be communicated and included in cruising guides as well. In regard to the concern about travel difficulty back to the island chain, a good method to prove that it is not hard to sail back from Curacao is to organize a regatta following the previously mentioned northern route.

The latter recommendation immediately was realized by launching the plan for the new Heineken Curaçao International Regatta, to be held annually in November at the end of the hurricane season. All At Sea reported on this plan in the February issue. The Heineken Curaçao Regatta was inaugurated on the same day Koen and Erwin presented the results of their research,

During the presentation the students only afforded a glance behind the scenes of the results. The full report consisting of 130 pages addresses the overall potential of each lower Caribbean island and provides strategic advice. It can be ordered for a small amount via [email protected] More information and research results:  www.caribbeanyachting.info.