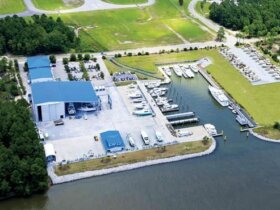 It’s early November on the US east coast and today feels like the first real day of winter, cold and clear. A brisk northerly is blowing, and the longer we’re delayed, the colder and stronger it will become.

Yet as winter approaches in Hampton, Virginia, a hurricane is blowing itself out in the Caribbean. This is the cause of our delay, because we want to sail for Tortola.

I was hired to skipper an Outbound 46 from the Chesapeake to the British Virgin Islands as part of the annual migration of cruisers entered in the Caribbean 1500. Traditionally, the event departs the US on or about November 1. This year the fleet is nearly 80 strong, a record. As I write, we’ve been delayed six days and counting, another record, albeit a dubious one.

David and Gretchen Cantor are not unlike many of the retired or semi-retired couples that enter the Caribbean 1500 each year, seeking camaraderie and comfort. The boat Callisto marks a major step up from their previous boat, a Pearson 303, which they’d sailed coastal in the northeast. They have never ventured offshore, nor have they sailed overnight.

I arrived in Hampton a week before departure date, to get to know the Cantors, the boat and the crew. On board is their son Aaron – a grad student at Berkeley, and a family friend, Christian, from Vienna, a man with years of experience on the European ocean racing circuit, including several Fastnets and a few Admiral’s Cups ‘back in the old days’ as he puts it. They’d hired me for my experience offshore, hoping to gain enough confidence to make me redundant on their future voyages. I’ve met several others like me, sailing in the 1500 as sort of skipper/instructors, something the rally organizers encourage.

Our weeklong delay has allowed us ample time to prepare Callisto for the voyage. I walked her eager owner David through my inspection process (which has gotten pretty routine this summer, this being my sixth delivery of the season), going over every part of the boat, from the through-hulls to the masthead, emphasizing the fundamentals of keeping the rig up, the water out, and the crew onboard. On a large modern cruising boat, systems are complicated, expensive and difficult to repair at sea, and it’s essential to keep that in mind and avoid the danger of becoming overwhelmed.

This started with a full rig inspection. David and I walked around the boat examining each shroud. We tested the tension, sighted up the mast-track to ensure the mast was in column, and made sure that each clevis pin was intact and installed correctly. Then, with Christian’s help, I climbed aloft, again inspecting each wire termination, each halyard, masthead sheaves, shackles, etc. And it’s a good thing I did! Though the boat is only a year old, I discovered that the solent stay was damaged during installation to the point that it needed replacing. The Outbound builder’s were eager to make right, and in little more than a day had enacted a satisfactory repair.

We inspected and installed the storm sails, and David gave the entire crew a walkthrough of each through-hull, ensuring wooden plugs remained tied to each in case of emergency. We checked and re-checked the engine oil and topped up the fuel and water tanks, ensuring we had ample spare water in gallon jugs in case our tanks went bad (which actually happened on a previous delivery). I inspected the jack lines that David installed, ensuring we’d be able to fulfill that third fundamental of keeping the crew on the boat.

Despite the modern conveniences aboard many of the rally boats, including the hi-def chart plotter – we counted no less than eight GPS’s onboard Callisto – ocean sailing remains a serious business, adventurous and exciting at its best, dangerous and terrifying at its worst. I try to emphasize to inexperienced owners to take full and total responsibility for their boats. Once offshore, it’s all about self-sufficiency, and with the nearby fleet at times providing a false sense of security, this attitude is essential. That broken solent stay on Callisto may have been the builder’s fault initially, but it’s ultimately our responsibility to ensure it, along with everything else on board, is shipshape before setting out.

Given the delay, we’ve had plenty of time to go over the watch rotation, create a simple emergency action plan, demonstrate the use of the life raft, and even had time for a three-hour lesson in celestial navigation. Despite the growing cabin fever, a quick look at the conditions in the Gulf Stream helped to remind everyone why we are still at the dock. Ultimately, the long delay will only make our actual departure that much more exciting.