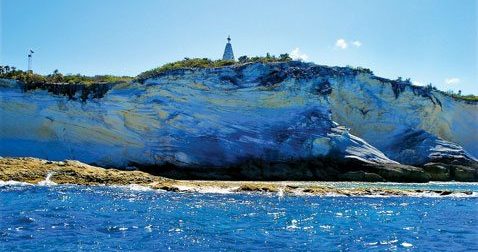 As the name implies Long Island is a very long and narrow island.  It is about a 35 miles sail from Great Exuma and is one of my favorite islands in the Bahamas. Due to how long this island is, and how much there is to see here, I am going to break it up into two different issues.

We are going to start this tour at the very north tip of the island. Here you will find a monument to Christopher Columbus’s historic voyage. The monument sits atop a cliff on the northern point appropriately named Cape Santa Maria.  If you come to this site by dinghy you should take it up the tidal creek and explore the large blue hole.

If we sail a couple miles down the west shore we will come to Adderley’s Plantation, which was started by Abraham Adderley in 1790 and was 700 acres. 30 years later his son, William, more than tripled the size of the plantation. By the time William’s son could take over the plantation it was on hard times, so he let Uriah, one of his workers, have it. Uriah cared for William until William slit his throat at the dock due to either a love triangle or economic hardship. Folklore says at low tide the dock rubble still has his blood stain on it. At the end of the 1800’s Uriah passed the land on to his children and the plantation stopped functioning as they moved to subsistence living.

Nearby you can search for the Stella Maris cave, which is big enough that picnic tables have been set up inside. Two cool things you will see are tree roots coming down from the ceiling and a large colony of bats flying around. 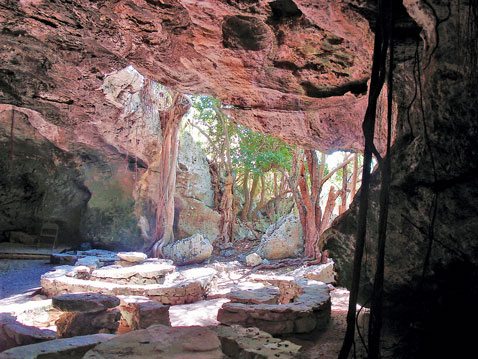 Now we are going to sail the boat to Salt Pond, also known as Thompson Bay. This is about as far as you can sail down the western side of the island due to shoal water, so you will need to rent a car to see the rest of the island.  The first thing you come to in the car is the old Spanish church, which is the oldest building on the island.  It is in remarkably good shape for how old it is and there is even a confessional built into the wall.

A bit farther down the road is the Long Island Museum and is well worth a visit to learn about the history of the island and its people. To me the coolest part of the museum are artifacts found inside Hamilton Cave that predate Columbus’s landing. In the next issue, we will start with this cave and continue to work our way south.