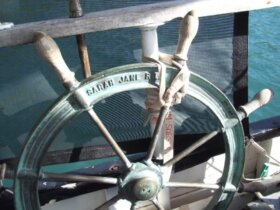 Have you ever been surrounded by so much lightning that the skies are alight with fire and you can feel the static as it strikes the water beside you? Lightning terrifies me. It is one of my biggest fears. While my boat has never actually been struck by lightning, our fridge electronics were blown out when a boat beside us was struck in the Rio Dulce. And our SSB radio switched on and then off again (by itself), in the middle of a particularly nasty storm sailing in the eastern Caribbean. Panic envelopes me if we are anywhere near a lightning storm and I have more than once been found cowering under the saloon table in the grip of terror. And yet, like many, I have a morbid fascination with it. Lightning is one of Mother Nature’s most spectacular but deadly phenomenons, even more so than hurricanes and tornadoes in terms of lives lost. From a distance we can marvel at its sheer beauty but put oneself in a small boat in the middle of a thunderstorm and it’s a whole different ball game.

On average, there are two thousand thunderstorms happening at any given time around the world, producing one hundred lightning strikes per second. That’s over eight million lightning bolts a day. Each flash is approximately five miles long and about one inch wide and can reach temperatures of fifty-four thousand degrees Fahrenheit – that’s six times hotter than the sun.  And when you consider a bolt of lightning contains up to one billion volts, unleashing as much energy as blowing up a ton of TNT, it’s hardly surprising many of us live in fear of it.

In order to understand how lightning works I turned to the internet. The following is from the National Severe Storms Laboratory: A channel of negative charge, called a stepped leader, will zigzag downward in roughly 50-yard (46m) segments in a forked pattern. This stepped leader is invisible to the human eye, and shoots to the ground in less time than it takes to blink. As it nears the ground, the negatively charged stepped leader is attracted to a channel of positive charge reaching up, a streamer, normally through something tall, such as a tree, house, or telephone pole. When the oppositely-charged leader and streamer connect, a powerful electrical current begins flowing. A return stroke of bright luminosity travels about 60,000 miles per second back towards the cloud. A flash consists of one or perhaps as many as 20 return strokes. We see lightning flicker when the process rapidly repeats itself several times along the same path.

From the above, it seems the tall, protruding mast of a sail boat would be very attractive to lightning as it’s trying to find a path to ground.

So, are we, or more particularly our boats, more at risk than others? The answer seems to be a resounding yes. According to the statistics gathered by BoatUS.com from an analysis of ten years’ worth of lightning strike insurance claims, there’s a one in one thousand chance of your boat being struck by lightning. The probability increases in higher risk areas like Florida or the Gulf of Mexico. It’s probably obvious to say that sail boats with their lofty masts are up to four times more at risk  than other types of boats  – the bigger the boat, the higher the mast, the greater the risk – with bigger sail boats in the 40ft to 65ft range six times more at risk than others. Multi-hulls fare worse, with almost double the odds of being struck than mono-hulls. Why that is, no one seems sure. The risk is higher in fresh water as salt water is a better conductor.

It seems there is no absolute consensus on how to deal with lightning strikes on a boat – lightning is far too unpredictable. Some people feel that an unprotected boat provides no electrical path making it a less likely target for a strike, and that any lightning protection is only encouraging a strike in the first place. Lightning itself is perhaps less discerning. And when it strikes it could potentially cause far more devastating damage to an ungrounded boat than a grounded one. According to a leading expert on lightning, Ewen M. Thomson, the best way to protect your boat is “to place lightning conductors on the outside of the vessel with multiple air terminals at the top and multiple grounding terminals at the waterline. This provides a shielding enclosure, external current pathways, and more effective grounding to water surface.”

Whether you are for or against grounding your boat it seems there is no such thing as lightning prevention – all you can do (if you choose to), aside from staying out of lightning-prone areas, is to lead lightning to ground safely to minimize damage to your boat and crew and to make sure that you do it right.

Rosie Burr and her husband Sim Hoggarth on yacht Wandering Star have cruised the Caribbean and North America fulltime for nine years. Visit their blog: www.yachtwanderingstar.com