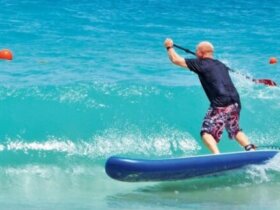 Stand Up Paddle Boarding in Grenada

Slip the board into the water and step on, paddling upstream from the launch. Within a few minutes you’re “in another world,” on a quiet creek with wooded shorelines. From your standing position you can see down into the water and out into the vegetation as you glide through the scene with even strokes.

Stand-up paddleboarders have become a common sight in North Carolina in places like Wrightsville Beach, spurred by the existing surf culture. The island has hosted annual paddleboard races since 2009, with the Cold Stroke Classic now drawing more than 100 paddlers. Another race, the Surf to Sound Challenge, adds a longer course with a surf start for advanced paddlers of the usual 4-mile circumnavigation of Harbor Island.

The rest of coastal North Carolina is catching on too. The rivers, sounds and creeks of the Inner Banks have a great deal to offer those who enjoy exploring, relaxing or exercising aboard their personal, self-propelled watercraft, whether the vessel of choice is a kayak or SUP.

“It’s friendly water,” says Liane Harsh of Inner Banks Outfitters in Washington, N.C. “It’s calm, for one. The boaters are friendly. There are a lot of places where you can paddle that boaters don’t go. So it’s safe, and it’s interesting.”

Paddlers have many options after launching from the ramp next to the shop. “From right here you can go up into Runyon Creek, and it’s like being in another world. Or you can come out on the river, and it’s totally different elements, a different scene,” Harsh says. “And you can do all of that in a four-hour paddle. Or you can paddle up and see the town from the water, which is beautiful. And then there’s an island right there with a beach on the back side. We have the greatest paddling area right here.”

Inner Banks Outfitters helps locals and visitors alike enjoy the water by providing kayaks and SUPs for sale, as well as rentals, equipment, lessons and group events. As many as 80 paddlers at a time have attended the popular Full Moon Paddle. “We look at the tables on the sunset and moonrise, and try to time it so that we’re heading up into the sunset into town, and when we turn around to head back, then the moon is coming up,” Harsh says.

Offering kayaks since the business opened eight years ago, Harsh points out that the demand for SUPs has come in the last three. “It’s the challenge and the uniqueness of it,” she explains. “Some people are looking for a workout, and others are just looking for something different. They see that it’s kind of the happening thing and that makes people want to try it.”

Beaufort County’s paddle trail system includes more than 380 miles of interconnected creeks, rivers, marshes, and swamps along with countless launches and access points. That’s only one county among many in the state’s coastal region offering outstanding waterways for paddling.

“There’s always something to see,” says Harsh. “One time coming back [from a Full Moon Paddle] we paddled right through a pod of dolphins and it was just amazing. They’re right there around you and that noise they make – those folks were so happy.” On another SUP outing, she paddled directly over a school of skates.

The nonprofit Pamlico-Tar River Foundation and its partners have produced a waterproof guide identifying paddle trails, access points, and campsites. The organization is also working to build a continuous system of raised camping platforms with screened enclosures that will begin near the headwaters of the Tar River and extend to the estuaries surrounding the Pamlico Sound. Executive Director Harrison Marks says he encourages paddling as an excellent way for people to explore their coastal environment with minimal impact.

“Our annual Kayakalon is a paddle, pedal, and run event, and this year we included a division for paddleboards for the first time,” Marks adds. “We’re also planning youth kayak lessons this summer, which will provide an opportunity to get some kids out on the water who might not have that opportunity otherwise.”

Kayakers and paddleboarders are a growing part of the recreational boating community nationwide, and they are finding a perfect place to paddle on the diverse waterways of Eastern North Carolina.

julesnorwood
View More Posts
Jules Norwood is a UNC-Chapel Hill alumnus and operates Carolina Wind Yachting Center along with his father David. Jules is an avid sailor and has worked as a newspaper and magazine writer and editor.