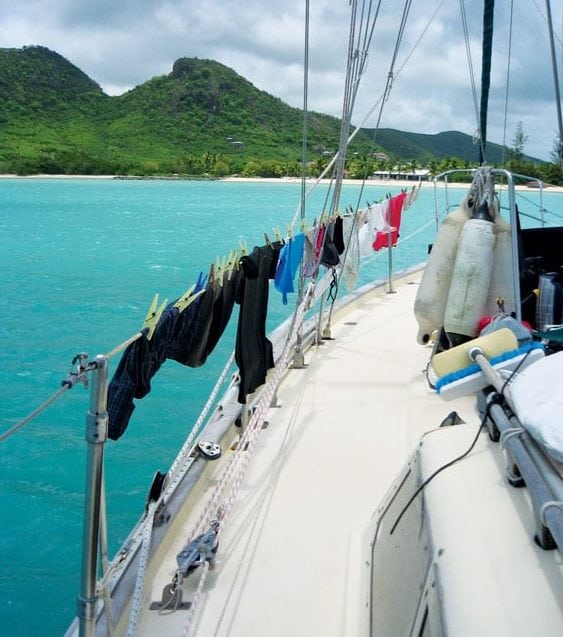 Some watched from the sky as their homes and neighborhoods
were leveled. Some were lucky enough to have returned from work in time to
evacuate, but at least one rode out the raging storm in a tree after his house
filled with water. Even Hurricane Hunters, men and women with the most hands-on
knowledge possible, were at the mercy of 2005’s Hurricane Katrina.

While
politicians pointed fingers after Katrina and Rita, another killer named Wilma
popped up on the radar—the most intense storm ever recorded in the
Atlantic basin with a barometric pressure reading of 882 millibars/26.04
inches. Even as Wilma devastated Cancun and mowed across
Florida, a 22nd event became
Alpha–the first time a Greek alphabet name has been needed since storm naming
began in 1953. Then Beta sliced through
Nicaragua. Final casualty and
damage numbers are still being tallied by nations affected as this
catastrophic, record-setting hurricane season ends.

Today,
via internet, radio, and other media, boaters throughout the Caribbean
can monitor storm approaches, thanks to satellite images and computer models.
But a crucial component for pinpointing where and when a storm may hit is
information gathered by United States Air Force reservists from the 53rd
Weather Reconnaissance Squadron of the 403rd Wing, based at Keesler Air Force Base in
Biloxi, Mississippi.

Each year
when weather is brewing, these Hurricane Hunters fly ten WC-130J Hercules
turboprop planes on missions to collect data in the Atlantic Ocean, Caribbean
Sea, and Gulf of Mexico. Why do they do it?
Because satellites don’t provide complete information and ground
observation stations aren’t available in the sea. Instead, to provide
more accuracy, their planes go where the best information is found—inside
the storm.

As the
Hurricane Hunters observed barometric pressure dropping in late August, they
knew before the rest of us that a storm larger than 1969’s Gulf Coast
killer, Hurricane Camille, was bearing down on their own families.
Katrina’s Category 4 winds and a storm surge of 30 feet left many of
these reservists homeless.

“I
would estimate that 70% of our people were directly affected by Katrina. Their
homes were either damaged or, in some cases, destroyed,” reported
Lt.-Colonel James Lindner, 53rd WRS Commander soon after Katrina.
The Keesler base itself was so badly hit that his
group had to set up shop during September and October at Dobbins Air Reserve
Base in Marietta, just north of
Atlanta, Georgia.
Despite their losses, the reservists never quit flying as the deadly storm
season dragged on.

“When you look at what has happened, it really emphasizes the
importance of what we do,” said Colonel Lindner. “The extra
accuracy translates into millions of dollars saved…but, more importantly,
that extra accuracy means more lives are saved.”