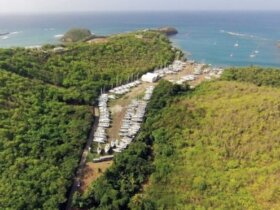 True Costs of Owning a CATAMARAN

When we cruised in the past we communicated by VHF, SSB and Morse code (just kidding about that last one). Radios were what we had at sea and it was enough. Having a scratchy sked with a friend a thousand miles away was a day’s excitement. When in port, use of a phone or fax machine for something special (or when in trouble), took care of the rest. Things are a little different now. Internet rules and we’ll do just about anything to get it.

Having settled down on the hook in Spanish Water, Curaçao with a geek friend close by, we ventured into a contract with local internet provider, Scarlet, and shared the costs.  As we both had lots of downloading to do, we signed up to unlimited time and data and bought the modem. Our geeky friend would be MC. Quite a challenge with poor coverage, two moving boats and not a fast signal to begin with. Fast, but expensive and limited, Digicel was put to rest.

Our friend placed the modem and her fancy Apple multipurpose router on a beer crate supporting a kitty litter bucket with holes on the backside for air, mounted it on her flying bridge and aimed it at the signal. This worked fairly well. Our Acer laptop was fine with the help of our Engenius adaptor but the tablet didn’t do well. Rafting up was considered, a stern anchor perhaps? We were dangerously close to becoming shore people. Get a grip.

Reenter Digicel, our old expensive friend, but let me be fair, a better signal. We added a small contract to include the tablet, plus the Acer could be ‘hot spotted’ when Scarlet was slow, like on weekends or because a wind shift affected signal reception. So the extra cost was justified. Right? We settled down to enjoy what we had.

After a few months we decided here on our yacht Syrius that we were tired of Digicel’s telephone charges for our cell phones and would add a telephone to our Scarlet contract. One a whole lot cheaper. The phone, however, had to be plugged into the modem. Thus the modem and router were disconnected, brought to Syrius and situated on top of the life raft under the litter bucket, with an extension snaking past the potatoes and the bananas in the vegetable hammock to the invertor. We fired it up. Signal booming through on everything. Goodbye Digicel. Bliss.

Not for long. He who holds the modem must run the System 24/7 so that everyone is covered. Right now we’re using a 400w standby invertor, while waiting for a warranty replacement on our 1000w. Its fan works. A lot. Sounds like breathing. Worse. Panting. Running it 24/7 became an irritation. Call us old fashioned but we usually turn things off at night. Patience wore thin. One day, a bad squall came through and the kitty litter bucket started to wobble. Fearing it would blow away, I sat and held it for about 25 minutes in the cold, pouring rain until the squall abated. I didn’t mind the weird looks from people passing by but it set me to thinking what if the same thing happened at night? Our friend’s fancy expensive Apple thingy down the drain. 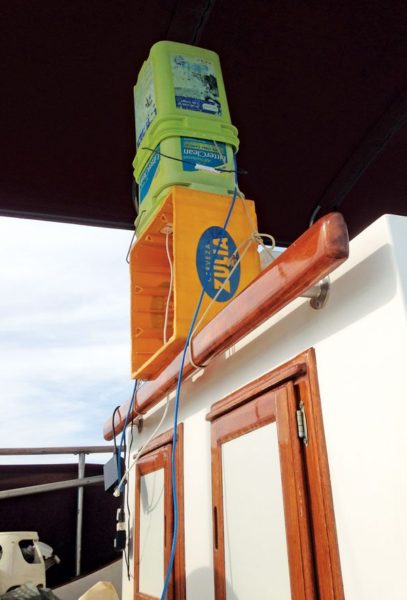 The two gizmos were again disconnected and returned to said friend. She patiently hooked them up again. Back to no tablet. What next? She ordered a new router. We muddled through until it arrived. With her usual focus and much experimenting she decided that the Scarlet modem liked to be high up on her bridge but the router was better lower and at her stern, us being behind her, less stuff between the two boats. But the cable between the router and modem was only three feet long. Off we went to buy a long cable to allow the two gizmos to be in a separate place. We came home, and she got to work.

Better, but not ideal. In and out.