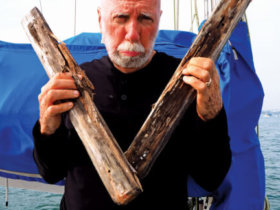 If you’re in the southern Caribbean and headed west from Trinidad, Curacao is one island you should not miss. With its many well-protected bays, especially the large anchorage at Spanish Water, the island makes a good destination for hurricane season, and, if you need work done on your boat or seasonal storage, Curacao Marine has a lot to offer.

Originally located on a smaller site close to the present yard, Curacao Marine was started as a result of Gijs Boer, one of the present owners and a former yacht builder, cruising from Holland to Curacao in 1992. He only planned to stop for 48 hours but ended up staying for 4 years and opening a shop restoring antique furniture. He and his family returned to Holland in 1996, where he opened a wood shop. However, the strange lure of Curacao proved too much for them and they returned to the island for good in 1997.

Gijs started searching for a site to set up a wood shop and was offered an entire boatyard. Not wishing to operate the yard by himself, Gijs enlisted the aid of his then brother in law, Pierre Verbiesen, a skipper of large dredges (think Suez Canal) and a steel worker. Pierre immediately joined him in Curacao and together they started Curacao Marine in 1998.

Realizing that the greatest profits would come from boats left in storage, Gijs and Pierre looked around for a larger site. In 2004, they moved the business to its present location, a site originally used for the delivery and processing of cattle from Venezuela and elsewhere. At present, there is room for about 50 boats in the lower yard, but by hurricane season of 2006, there should be room for an additional 50 boats in the upper yard storage area. Future plans also call for a 50-berth marina.

On our first visit to Curacao four years ago, we were hauled out there at what is now the “old” yard on a track system, which was able to accommodate the 24’ width of our 43’ catamaran. The lift was pulled out of the water on a cable and involved much work by divers in the water to position the boat correctly prior to hauling it out. Charlie and I were most impressed by the care that Gijs and Pierre took with the boat during the haulout.

Our impressions have not changed. They now use a hydraulic 40-ton lift pulled by a tractor, and, though a diver is still in the water, it takes a lot less time to haul the boat out because the lift can be steered as well and raised and lowered, which cuts down on the time needed to position the boat in the water. For hauling catamarans, they place steel bars across the lift to stabilize the boat. With these bars they can haul boats up to 33’ wide.

Four years ago we were also struck by the flexibility of the yard to work with the boat owners regarding the timing of various types of work they needed done. This, too, hasn’t changed. For instance, we needed to stay on the lift until the day after they pulled us out of the water to pressure wash all the anti-fouling off the gelcoat. It could not be determined how much paint was on our hulls until we were out of the water nor the best method for removing the paint, but their scheduling flexibility allowed for testing various methods of paint removal until it was determined the pressure washing worked the best.

We also needed to be on the lift over the weekend prior to going back into the water so we could primer and paint the keels, which were unreachable while the boat was on blocks; this also was no problem, even though we ended up going on the lift Saturday morning. We originally planned to take the bottom down to gelcoat, then apply epoxy primer and anti-fouling; however, there were small bubbles in the gelcoat which necessitated its removal. Clifford Martina, a long-time employee of the yard who had done some excellent fiberglass work for us 4 years ago, was assigned to the project. He determined that the best removal method was to peel it off with a planer. This required a delicate touch so as not to gouge the fiberglass, but Cliff was up to the job and deftly removed all the gelcoat in less than 3 days.

Flexibility on their part also means flexibility on your part. We hauled out on a Wednesday thinking we would have 2 days for the yard to remove the paint prior to the weekend. Unfortunately, there was an island holiday on Friday, so the timing was tighter than planned to get the paint off and the gelcoat removal was delayed until Monday. Of course it didn’t help matters that we ended up hauling during the rainy season, which was completely our fault. We were lucky that we only lost 2 days to rain during the almost 4 weeks we were out of the water.

After the hulls were peeled and washed with ammonia to leach out the moisture, yard personnel sanded and used a heat gun on spots to insure the hulls were ready for the epoxy primer, which Charlie started applying a little over 2 weeks after haulout.

Fortunately life on the hard at Curacao Marine isn’t that bad even for someone like me who thought her boatyard tolerance limit was one week. The showers and restrooms are clean and private, although currently the one facility in operation is coed. Wireless internet is available although only at the office. An onsite laundry is planned, but, for now, you can have your wash picked up by a local laundry.

There is only one, albeit very good and reasonable, restaurant within walking distance of the yard; however, if you have a bicycle, it is only a 10-minute ride into Willemstad, the capital of Curacao. You can also bike to two large hardware stores and one plumbing store. There is a shuttle bus that will take you to a large supermarket which is across the street from Budget Marine.

Curacao Marine offers other services, including teak work, composite structures and painting. You can safely store your boat there for hurricane season as they have tiedowns going one meter into the ground. Mast storage is also available.