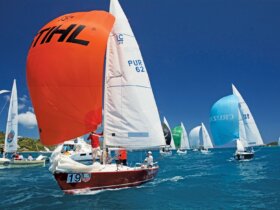 In September, the Editor’s Log touched on the subject of designated anchorages and how some freedom-loving sailors have taken exception to them, saying they should be allowed to drop their hook anywhere. In this edition, Captain Fatty Goodlander turns his critical eye on the same problem and his revelations are shocking. Fatty describes how cruisers are being gouged by unscrupulous officials, semi-officials and downright conmen. I have to admit that during my time cruising various parts of our watery world, I have been conned a few times. Nothing too serious, mind you, and most instances were quite humorous.

The first one I fell for was the ‘your-wife-bought-some-fish-and-she-says-you-will-pay-me’ scam. This one’s pretty straight forward. A guy saw us come ashore in the dinghy and watched as my wife headed in one direction with her shopping bags while I popped into the chandlery. On leaving the chandlery I headed to the nearest bar to await my wife’s return, the smiling villain appeared in front off me saying he had sold some fish to my lovely wife, who didn’t quite have enough money to pay him, and that I would take care of it. And yes, I fell for it and later learned that I was the third cruiser to do so that week.

The second scam was the ‘I’m-out-of-gas-and-left-my-wallet-at-home-and-if-you-give-me-some-money-I’ll-fill-up-drive-to-my-house-and-return-with-the-cash’ scam. Not only did I fall for it, I even gave the guy a fuel can.

My all-time favorite was the ‘do-you-remember-me?’ scam. That’s that the opening line of the shakedown. The same individual pulled this on me at least six times. The first time, being polite, I said “Er … yes. I think so, How you doing?” That’s when he gave me the spiel but I refused to part with any money and he went away empty handed.

The next five times he stopped me on the waterfront, I beat him to it by saying, “Hi, do you remember me?” He thought this was hilarious.

I got to know him so well I eventually asked him why he scammed the cruisers for a living. “It’s so easy,” he laughed, “they’re nice, rich, trusting and polite.”

In this edition, Kathy Bohanan Enzerink takes an in-depth look at one of North America’s most successful boat builders, Grady-White. There is always banter between the ‘wind and string’ brigade and power-boaters, yet power-boating is growing in popularity throughout the Caribbean and All At Sea is delighted to see that happen. The whole point of leisure boating is to get people out on the water and sail-boating can be a time consuming pastime. This is where power boats come into their own. At the turn of a key you are off and running, places to go, things to see, and all at a pace that suites the demands of the modern world. Designers of small powerboats, like Grady-White, bring speed, safety and comfort to vessels that are easy on the eye. Looking astern as a creamy wake unfurls is a joy. Many of today’s small powerboats offer more than a day out. Thanks to innovative designs, roomy onboard accommodations attract the weekender and those looking to explore further afield in the knowledge that a comfortable night’s sleep, a cold beer and a good meal are all part of the package.