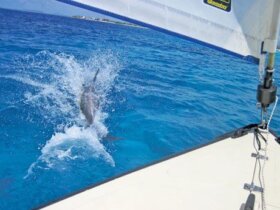 At a time Caribbean tourism might be easing and at risk because of the global warming issue, investors in Curacao still believe in the growth of the sector, proving their confidence by starting huge hotel projects at several strategic spots on the south coast. Hyatt started work on a 350 room resort at Barbara Beach, Palapa recently did the groundbreaking for a marina and dive hotel, and Renaissance already shows its remarkable profile at Rif Fort at the capital of Willemstad’s Otrobanda waterfront.

Though the plans for the three projects roughly were made at about the same time, Hyatt was the first to break ground in December 2005.  But Renaissance made headway and will be the first to open her 240 rooms and suites, as it looks now. Building new rooms seems an urgent matter on the island. Recent statistics show that Curacao is experiencing a tourism boom, justifying these developments that will deliver more than 1,000 new rooms over the next two years.

The 171-square mile island experienced an increase in visitor arrivals for the first half of 2007 of 15.8 percent from Europe; 32.3 percent from South America; and 14 percent from the Caribbean region. Though American arrivals showed an overall decline of 4.1 percent during the same time period, the month of June yielded a 16.4 percent increase in U.S. arrivals. Tourism as an industry represents 15 percent of Curacao’s GDP.

The resorts under construction, among them two of major American chain resorts and one privately owned regional resort, are investing $230 million, yielding jobs for many of the island’s 134,000 inhabitants, consisting of more than 55 nationalities. They provide visitors with a multi-cultural, multi-ethnic experience.

Curaçao lies just outside the meteorological area known as the hurricane belt, guaranteeing minimum vacation interruption and a safe shelter for yachts. The island’s semi-arid climate means travelers will even find vegetation atypical of the Caribbean, including various cacti, thorny shrubs and evergreen trees.

Golfers, who currently can tee off at only two golf courses, look forward to the completion of the Hyatt Regency which will include an 18 hole course created by the famous architect Peter Dye.

The new accommodations will provide for all levels of luxury and styles of service, offering something for those seeking an intimate boutique property as well as big name brands for those seeking familiarity and comforts of home.

Renaissance Curaçao Resort & Casino
Situated on the waterfront of Willemstad, near the well known Megapier cruise ship facility, the Renaissance Curacao Resort & Casino will have 240 deluxe guest rooms and suites.  The history of Curaçao is also reflected in the resort, as it is home to the legendary Rif Fort, a 178-year-old landmark designated as a UNESCO World Heritage site where eight restaurants and fifty retail boutiques can be found.  The resort area is rounded out by a six-screen Cinema, Casino and a 570-car covered parking garage, offices, meeting areas, a manmade signature Eternity beach, boardwalk and park.  The resort is planned to open in September 2008.

Hyatt Regency Curaçao
The ceremonial groundbreaking of the 350-room luxury Hyatt Regency Curaçao took place on December 1, 2005, officially marking the start of construction of the Santa Barbara Plantation project.  The 27-acre site overlooks the beautiful Spanish Water Bay, the famous Barbara Beach, and the Caribbean Sea and will also include a 30-slip marina, beach club, 52 vacation club units, 128 condominium homes, 106 residential lots, and 94 terrace homes.  It will be the largest hotel on the island and the first large hotel to open since the Sonesta (which is now a Marriott) was completed in 1992. A remarkable fact is the use of Curacao marble that will be extracted from the “Tafelberg” overlooking the former Santa Barbara Plantation where the new hotel is taking shape. The Hyatt Regency is also planned to open late 2008.

Palapa Curaçao Dive Resort and Marina
After more than ten years of planning and consideration the Curacao government at last gave Richard (Boy) Luckert, the owner of Palapa Marina in SXM at Simpson Bay, permission to build his Palapa resort and Marina on his home island Curacao. Luckert, a proud grandfather, who handed over the management of his St Maarten marina to his daughter Valesca, is building the new facilities in Curacao at the beautiful spot of Caracas bay.  There, the existing road had to be re-routed and the sheltered bay had to be deepened at one side and filled in at the other, where once the Mirador overlook partly was surrounded by water, and after the completion will be integrated in the complex. The groundbreaking for the marina last summer was also the start for the building of phase one of the resort: the first two condominium buildings and the marina. The marina will provide space for visiting (mega) yachts, and water sports. Other facilities will be offered to tourists as well as locals. With this, Luckert consciously focuses on tourists getting to know the locals and the local customs of the island better.  Luckert estimates the opening of phase one 36 months after the groundbreaking.