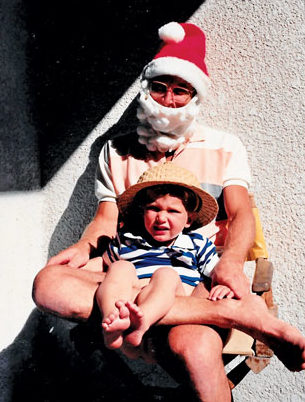 Editors note:  In the June issue of All at Sea, Els Kroon reported on the Standing NATO (North Atlantic Treaty Organization) Maritime Group One (SNMG-1) “presence operations” around the Caribbean Sea in late March and April, under the command of Rear Admiral Michael K. Mahon.  This was the first time NATO has ever deployed to the Caribbean for such operations.  We asked Kroon to describe the experience of “cruising” as a civilian aboard a war ship.

Being the guest of the admiral, hip-hopping from the American destroyer USS MAHAN to the German F class 124 air defense frigate FGS SACHSEN and back, is an extraordinary experience. I was hardly over my initial surprise hearing about the unique opportunity to sail on two Navy ships when I boarded USS MAHAN and left Curacao…destination: Martinique!

What a pleasure it was being invited for lunch in the Admiral’s quarters!
Together with chief of staff Ulf Morten Fossum, a Norwegian officer, we discussed the plans for the upcoming eight days at sea, just before we set sail.

The following seven days I spent on the SACHSEN as a guest of Commanding Officer Hardy Hübener and first officer (XO) Björn Weyer, who provided all the information I could ever wish for, however many actions are highly classified on board—more than ever I realized.

In the beginning I had some troubles finding my way around on two different ships, but that was just a phase. After a day getting around on the SACHSEN it was not an issue any more. The ship is well-organized and clean! Imagine me, being Dutch, having to admit that this German ship might be cleaner than a Dutch Navy ship; but if you ever experienced the traditional Thursday’s “Grossreinschiff,” you’d have to admit it’s true!

All hands were working in all departments of the ship to clean corners, cupboard tops, showers, toilets, in short everything… until in mint condition! The nicest thing was that the whole crew more or less enjoyed the weekly activity, working together with lively music loudly playing over the ship’s PA system, being rewarded with “Kaffee und Kuchen,” a tradition as well. That’s what I call united forces!

In the beginning, most crew looked up when seeing me around, but after a while I was able to take informal and relaxed shots of people doing their jobs or enjoying free time. The RAS (fuel replenishment at sea) action, described by Commanding Officer Hübener, was one of the first incredibly good opportunities, as were the activities on the Saturday before Easter. While the whole nation back home enjoyed a day off on Good Friday, the SACHSEN crew went through several strenuous exercises, from early morning till late at night.

So after completing Saturday morning’s busy program the captain showed humanity—the whole crew idolizes him and his XO for their kind humanity—by treating his men to a BBQ, some beers, and a swim in the sea. It would be only the second time in the two and a half years in operation that there would be a possibility to take a dive in the warm and clear Caribbean waters on the open seas.

Like all action on board, the swim needed to be solidly prepared, with the preclusion of the possibility that anything could go wrong. When the moment had come, dozens of swim fanatics gathered on the heli deck aft where one of the fences had been lowered to make a joyful dive possible. The speedboat was lowered to provide assistance in case of emergency (or sharks).

It was not sharks that thwarted our joy, it was those big and ugly drifting sea creatures called Portuguese Man o’ War that threw a spanner in the works.  Five of them—clear, pink, and harmful as hell—made us say goodbye to an invigorating dive. Never mind that! SACHSEN is one of the few Navy ships that have a movable swimming pool on deck, so at the red light for the sea swim, a big plunge of water rats could be heard on the refueling deck, while others started preparing the BBQ.

Spirits kept high after dinner when a huge screen was tightened in the doorway of the helicopter hangar creating an open air theater for the movie “Pirates of the Caribbean.”  The home theater hardly shouted the sound of the rustling sea down. What more could we ask for? While almost all men were drinking beer, one of the officers opened a bottle of wine for me…with a USS Mahan label.

Life at sea is not bad, especially in the Caribbean, even when you have to spend certain holidays without your beloved family. Many thoughts were back home during the improvised mass on Easter Sunday morning.

One thing is for sure when you’re a guest on board: time flies! Days started very, very early, but too soon it was time to go for lunch.  I was shown around throughout the whole ship. I saw the Ship Control Center, met “Jenny” the gas turbine, climbed the steep, steel ladders into the APAR radar superstructure 56 meters above sea level, and learned about the Damage Control Center.  I admired the cooks in the galley preparing lunch for all 230 crew, visited the on-board shop where I bought a nice SACHSEN buckle and a hat, saw the CIC (combat Information Center) while in operation, spent many hours on the bridge, and…I was a student among the 22 cadets that were on board as trainees.

Now I know a little bit more about warfare and I must say I’m impressed…of what a Navy ship can do in time of war but also in time of peace, providing safety and help whenever needed all over the world. The well-trained crew exactly knows what is expected from each one, and they work together like well-oiled machinery.

The same counts for the crew of the American ship. On the MAHAN the standard method of working is different but the atmosphere of working as a joint force is the same, where you can feel the pride of all, being part of this beautiful ship and the US Navy.

Sailing into the harbour of Martinique on the USS MAHAN brought me joy and pride, but also some sadness. I had to say goodbye, but not before my last evening on board the SACHSEN where the Admiral organized his welcome reception for the local dignitaries from Martinique. Thanks, Admiral Mahon, Commanding Officer Hübener, and all officers and crew of FGS SACHSEN and USS MAHAN.  I wish you fair winds and following seas!