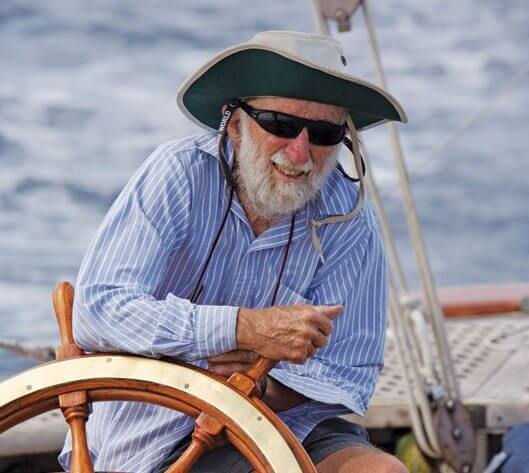 Thousands of yachtsmen can thank goodness that Donald Street, Jr., an avid sailor who has spent over half a century cruising, charting and writing about the Caribbean, didnâ€™t follow his motherâ€™s advice. That is, she wanted him to get a bankerâ€™s job in the â€˜canyonsâ€™ of New York so he could make money and buy a boat rather than try to make money in yacht design or sailing for a living. Today, Streetâ€™s rebellion and subsequent career on the sea is legendary. His name is synonymous with a number of ground-breaking guides and charts that literally opened up the Caribbean to bareboat companies, crewed charters and pleasure cruisers.

Itâ€™s not all that odd that Street would end up spending more time on sea than land. Yachting was definitely in his blood and he can trace it back at least four generations to when his great grandfather raced ice boats and sandbaggers on New Jerseyâ€™s Barnegat Bay. Street started sailing as a teenager out of New Yorkâ€™s Manhasset Bay Yacht Club. He later headed off to Catholic University in Washington, DC, where he and a couple friends founded a sailing team. Competition, and his education, was cut short by the Korean War. He ended up in a short-lived career in the Navy. Afterwards, it was back to finish at the university. This is when his real education in sailing started. Over the next few years he spent time racing with the likes of Arthur Knapp, Charlie â€˜Butchâ€™ Ulmer and Colin Ratsey, sailing transatlantic and back, and performing odd jobs in boatyards.

It was after this, seeing the ravages of a stressful profession and cold climate on both of his parents, Street decided to jump ship. He followed a friends adviceâ€™s and bought a one-way $45 ticket to the Virgin Islands. The rest is history, as they say, when Street purchased Iolaire, a 1905-built 46ft engineless yawl, on which he embarked into the charter business. It was while having cocktails at Caneel Bay Resort on St. John that one of Streetâ€™s charter guests encouraged him to write. It proved sound advice. Then again, it came from famous author John Steinbeck.

â€œIn the very early years of Iolaire chartering we picked up most of our charters as we were the only boat in the VI that would fight our way eastwards across the Anegada passage. No one in VI knew anything east of Anegada. Similarly, the Antigua fleet never went west of St. Martin. Iolaire was the only boat that cruised both areas,â€ explains Street. â€œMost of the exploring was done on charter. Charter parties would ask me â€˜what are we going to find when we get in this harbor?â€™ to which I would reply â€˜donâ€™t know, never been here before.â€™â€

Street wrote his first cruising guide, the Yachtsmanâ€™s Guide to the Virgin Islands, and had it privately published in 1964 on a hand powered mimeograph machine by charter broker Frank Burke. It wasnâ€™t that there werenâ€™t guides produced before this time. However, Streetâ€™s were the first that were comprehensive and no-nonsense. They offered yachtsmen who never sailed Caribbean waters a ground-breaking mix of practical advice, solid information and informed opinions in a non-narrative form and, most importantly, sketch charts. Two years later, Dodd Meade published Streetâ€™s Cruising Guide to the Lesser Antilles. This is the book that opened up the Caribbean to the cruising yachtsmen and made bareboat chartering possible.

â€œBefore I wrote my guide the losses to the beginning bareboat companies were so high that it was all but impossible to obtain insurance,â€ says Street. â€œI have a reprint of the first article I ever wrote, Going South, for â€˜Yachtingâ€™ in 1964. Alongside my article was one by the editor, Bill Robinson, who said there isÂ another way to go south â€¦ fly and charter.â€

â€œThe first time we went to Grenada there was a foul up and we discovered when we reached the north end of the island that all the charts covering the area were back at the yacht club,â€ Street tells. â€œSo, we lashed small cushions on the lower spreaders port and starboard; rigged a flag halyard port and starboard so we could send up Heineken beer to the lookout. Either myself or Ed Pionkowski (who now lives in Barbados), was on the spreaders for the next six days! We even sailed into the Tobago Cays via the southern entrance; a routing the present day guides (except mine) say is too dangerous.â€

In 1969, Street wrote the Yachtsmanâ€™s Guide to the Grenadines. In 1974, the Cruising Guide to the Lesser Antilles was reissued in a much larger and expanded form. It went through three printings before the W.W. Norton & Company took over and allowed Street to re-write and expand it into the three separate volumes it is today.

Today, at 81, Street is still writing while wearing many other business hats. His Transatlantic Crossing Guide has been completely re-written as a Guide to the Atlantic and Caribbean basins and is now in the hands of the editor. Meanwhile, his Guide to the Cape Verdes Islands came out last September.

â€œIt is hoped that this guide will do for the Cape Verdes what my first Cruising Guide did for Eastern Caribbean.â€

Additionally, you may be interested in Nancy Terrell’s Fifty Years At Sea:Â Interview with Don Street from a couple years back.