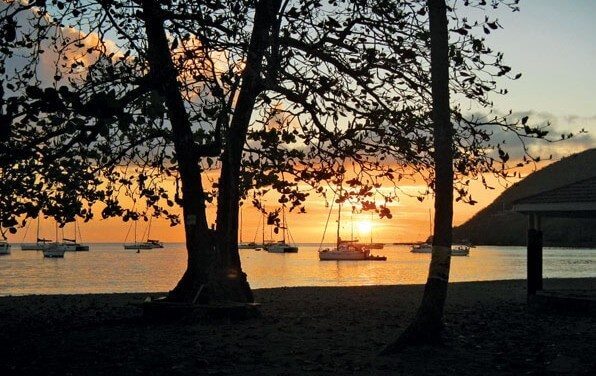 The absence of marinas and moorings has made Dominica a difficult island for many cruisers to visit. Now, the tide has turned. A new mooring field placed in Prince Rupert Bay, Portsmouth, has opened up the Nature Island to encourage the economic benefits of nautical tourism. To welcome cruisers, P.A.Y.S. (Portsmouth Association of Yacht Services) in Portsmouth, along with government officials and island marine professionals, hosted a ‘Yachtie Appreciation Week’, February 14th to 21st. Over fifteen yachts, members of the Seven Seas Cruising Association (SSCA), Salty Dawg ralliers and ralliers from the North American Rally for Cruisers (NARC) attended. It proved a great way to spotlight why Dominica is a must-stop island for cruisers.

“Many of the sailors had been to Dominica in the past, others used to pass her right by and a few had never been to the island before,” says Hubert Winston, president of the Dominica Marine Association. “Yachtie Appreciation Week 2016 successfully converted many to fall in love with Dominica and its people.”

Two of the cruisers attending were Thomas ‘Tom’ Jacobs and his wife, Barbara Cunningham, U.S. residents and members of the Salty Dawg Rally who attended the rendezvous aboard their Pacific Seacraft 40, Kalani.

“We have been to Dominica before, but never stayed this long,” says Jacobs. “Our favorite was the tour of the Titou Gorge Falls. We also enjoyed a morning snorkeling tour with P.A.Y.S. member Fabio and the kick-off P.A.Y.S. BBQ.”

The week’s fun began with a beach BBQ complete with music and dancing. The next day followed with an orientation talk and walk into the Portsmouth market and to local businesses. Over the ensuing five days, cruisers could enjoy a number of tours. These included an Indian River boat tour, a trip to the natural hot springs at Wotten Waven, a guided hike to the world famous Trafalgar Falls, a visit to the Cold Soufriere Sulphur Springs in Pennville, a bathe in Chaudière Pool in Bense village, a hike up Morne Diablotin, the tallest mountain in the Eastern Caribbean standing at 4848ft and in the Morne Diablotin National Park, and a tour to the Milton Falls and the Syndicate Trail above Portsmouth. Cruisers learned to cook local provisions like plantains and breadfruit at a Cruiser’s Potluck held at week’s end.

A formal dinner party held at historic Fort Shirley, located in the Cabrits National Park, concluded the week. Attending were the Minister of Tourism, Hon. Robert Tonge, officials from the Ministry of Tourism and the Discover Dominica Authority, P.A.Y.S. members and all the participants and supporters of Yachtie Appreciation Week 2016.

“At the lovely dinner I had the opportunity to present the SSCA burgee to Hubert Winston, since he is the Cruising Station Host for Dominica,” says Joan Conover.  Conover, SSCA cruising station coordinator, with husband, Greg, aboard their Morgan 511, Growltiger, worked with fellow cruiser Magoe Johnson, the Salty Dawg’s Linda Knowles and NARC’s Hank Schmitt, whose Offshore Passage Opportunity members donated the funds for the moorings, to orchestrate some of the events.