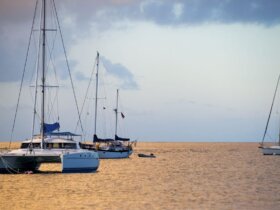 Will Your Anchor Hold? Basics of Anchoring Solved

A year ago, we saw two students of the Peter Stuyvesant College (PSC) in Curaçao organizing a sailing race as part of their final exams. This year it was a team of three that did it again!  On February 9th, Tirza van der Straaten, Tara Blanken and Thomas Ros—the “Three T’s”—organized the first big freestyle windsurfing event in Curaçao.

In the last year of their college time, local PSC students face the ultimate challenge. They have to organize a sports event for the local community in which they show their ability to combine skills learned at school.  Tirza was there when two sailing friends organized their sailing race for yachts last year. Being a sailor since she was able to walk, it was obvious that her final school project would be a similar one. When she discovered that Windsurfing Curaçao wanted to organize a freestyle competition, but had not yet because of a lack of time, she seized the opportunity with both hands, found two fellow students willing to accomplish the job together, and started preparations.

While all students in Curaçao enjoyed a full week off because of the Carnival festivities, the Three T’s set to work at full tilt to be able to present a perfect windsurfing event at the end of that week.

Soon contacts were laid with the owners of Windsurfing Curaçao who gladly gave permission and their cooperation for the event.  Sponsors were found for drinks, presents and prizes for the participants, and judges were appointed—
among them Chris Hellburg, who was one of last year’s organizing students. Stopwatches were snapped up, the famous DJ Paco was found willing to provide the music for a friendly price, shopping was done for the barbeque, and parents were asked for assistance in the background.

All three were amazed and pleasantly surprised with the large number of participants. Fifty four-minute heats were needed to give all 35 competitors in the beginners, intermediate, and advanced class the chance to qualify for the finals in a double elimination. The Three T’s set up a tight schedule, aiming for the prize giving ceremony at five p.m. sharp, saving enough daylight time for the barbeque.

It was wonderful to see how accurate and self-assured the teens acquitted themselves of their jobs. While Tirza handled the stopwatch, Thomas raised and lowered the green and red flags, and Tara filled in the results on the score board. All procedures went so smoothly that it looked like they had done it many times before.

The ambiance on the beach, which was just completed with new white sand, was great. In between the start and finish signals, Ingmar’s voice could be heard, naming all moves, tricks and jumps of the competitors and offering multilingual encouragement for all participants. It was a pleasure to see how much these youngsters improved their freestyle skills in only the two years since Windsurfing Curaçao has been training them.

Following the famous windsurfers of the neighbouring island of Bonaire, the Curaçao sailors are catching up and showing better results every time.
Nevertheless, it was a Bonairean who won the competition at the end of the day. It so happens that Choko Frans, the youngest of the famous Frans brothers of Bonaire, temporarily lives in Curaçao to study. Although he missed the first heat, thus being forced to do all heats in the double elimination, he took the win all the time and even managed to beat Windsurfing Curaçao’s Ingmar twice in the double finals.

At the prize giving ceremony Tirza handled the microphone as if she had done it a hundred times before, praising all winners and encouraging all others.
All can look back on a great and well-organized event that might get a sequel if the organizers will stay on the island. And of that, one can never be sure if graduating students are involved. They might leave to study in Holland or America. Maybe other students can take over next year? As long as Peter Stuyvesant College continues this final exam requirement, all possibilities are open.