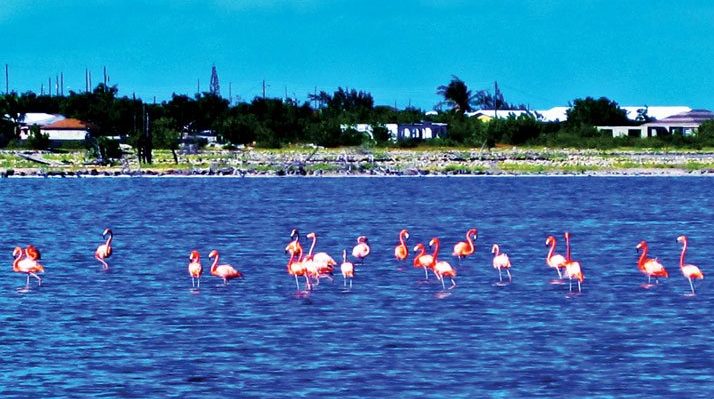 The Turks & Caicos Islands are at the southern end of the Bahamas Island chain, but are not part of the Bahamas. Instead they are still part of the British Empire. Even though the Turks and Caicos are large in area, there is very little useable land mass and we are going to start our tour on the Caicos side at the main island of Providenciales, otherwise known as Provo. This is where most of the tourism is concentrated and if you did not come on a boat you will probably will be staying on Grace Bay, which is an award-winning beach with the swell crashing over the protective offshore reef. In fact, Provo is known for many spectacular beaches.

Those of us on boats have a few choices on where to stay. I like Sapadilla Bay on the south side of the island.  Even while Grace Bay on the north side is getting pounded it is flat calm here.  In fact, sailors have been using this bay for centuries attested to by the rock carvings at the top of Sapadilla Hill stating the vessel and year of visit. Plus, it is free, but there are also several marinas to choose from along the north and south shores.

Outside of Sapadilla Hill, my favorite thing to see on Provo is Cheshire Hall Plantation.  This ruin was a successful plantation back in history and is presented well with the best restored building being a slave quarter. Some other places worthy of your time are the Princess Alexandra National Park and Caicos Conch Farm.

Think of the Caicos Island as a 60-mile-long oval with islands on the north end and open water to the south. In the middle of this oval is a huge sand bar 20 feet deep and is known as the Caicos Bank. Due to a combination of shallow water on the south side and reefs on the north the biggest islands of North, Middle, and East Caicos are fairly off limits to vessels. There is some access inside the reef to the small islands to the northeast of Provo, but other than Provo the main islands you can sail to are West Caicos (which has a housing development on it) and South Caicos all the way across the bank.

South Caicos sits right on the edge of very deep water to the east making this is a perfect natural harbor.  There is a natural tunnel from the middle of the island to the ocean, which was used to irrigate the salt pans, called the Boiling Hole.  If you are lucky you might even get to see flamingos feeding in the salt pans.  Once you are back from the hike to the pans you should also check out the fringe reefs helping protect the harbor.

Now, 20-25 miles to the east across the deep water is the other group of islands, the Turks Islands and we will discuss them in the next issue.