Heading north from Beaufort, S.C., on the morning tide late in April, our 82-year-old motor yacht, Cygnus II, glides through the beautiful marshes we’ve called home over the months of what passed for winter. For me, leaving port there’s always an odd but comforting mix of exhilaration and regret. We’re heading 1500 miles north to Lake Ontario and our summer charter grounds in the 1000 Islands along the St. Lawrence River. Our official spotter, Shelby the Labrador, barks joyfully as a couple of dolphins leap in our bow wave. For the moment she’s forgotten that she hates leaving any port, and especially her many friends in Beaufort. Our Dalmatian, Dublin, barks too, but he’s not sure what all the fuss is about.

The mist lifts off the river, promising a spectacular day. After stopping to visit a friend in Charleston following an uphill run fighting tides, our second day out we pull into the familiar entrance to Georgetown, another lovely South Carolina community, and the third oldest city in the state. The well-kept wooden shrimper, Stormy Seas, is returning home to her dock fully loaded. The shrimper’s family, who run the fish market by the same name, is waving enthusiastically from the dock. The sight brings tears to our eyes.

Naturally, we pick up some fresh caught American shrimp before leaving town. We call at Morsel’s, a small but quality market along the waterfront whose owners welcome us back, remembering us and our dogs from four years ago when we spent several weeks there undergoing repairs on our previous boat. Morsels and the new Low Country Market in Beaufort are highly welcome to transients like us.

Passing north, we count the all-too-familiar relics of wooden hulled shrimpers, and other boats lost or abandoned by their unfortunate owners. Occasionally we see a boat aground … either one who’s missed a marker, a not unusual sight, or one who didn’t realize that sand moves, particularly near an inlet.

We note that the tides are more extreme than usual due to an anomaly of the moon (extremely large and full). On this trip north, we’re glad Cygnus draws under four feet. Wildlife seems more abundant than usual for this time of year. The osprey seem more prevalent, for many more miles. They get a bird’s eye view of us and the dogs as we pass close in hopes of spotting their chicks. Occasionally, in addition to the abundant blue heron, we spot a fox fishing along the shoreline.

The thousands of people racing along I-95 between the populous states of the north and their Florida vacations are mostly oblivious to life in our universe, one that parallels the highway both physically and metaphorically. Most wouldn’t believe that the ICW from just south of Myrtle Beach to well south of St. Augustine is mostly wild and beautiful scenery.

There are some stretches of the inside passages – like the ditch behind Myrtle Beach and the 20-mile-long Alligator Pungo canal, straight cuts without much to look at – that most boaters find yawningly boring. As usual I’m the helmsman for the dug canals, because a) I’m never bored at the helm and b) with the exception of a few miles of Myrtle Beach, I find the scenery endlessly fascinating.

When I was primarily a sailor with pretty severe time constraints, I used to scoff at the idea of meandering north and south along the ICW, especially through these land cuts and along the S-turns of the rivers in Georgia. Although we ducked in often to avoid bad weather, overall we considered the intracoastal a less desirable backup route for offshore passages between Maine or the Great Lakes and the Florida keys.

Now, after countless trips inside and out, Mike and I relish each passage though these sounds and marshes, along rivers and the canals our forefathers dug to enable boats like ours and commercial traffic to make their way north and south many decades ago. Maybe it’s the fact that we travel on old wooden yachts, but we always share a sense of stepping back into history when we travel the ICW.

Twenty-six trips across the pond aboard freighters bound from Jacksonville to the Ukraine, tug and scalloper experiences, and decades of yacht deliveries have left Mike without a craving for additional offshore cruising. Truth be told, other than enjoying a brief offshore leg now and then, I now prefer the intimacy and relative protection of intracoastal waters.

Passing into North Carolina, we squint into the morning sun as the ICW travels mostly east to Morehead City and Beaufort. North Carolina is a beautiful state, with miles of stunning shoreline and interior waters, but much of it constitutes my least favorite part of the trip, thanks to the endless bridges. Unlike South Carolina, where tenders (in diminishing numbers due to construction of new high span bridges) open bridges at their own discretion, many North Carolina bridges open only on the hour. For a competitive boater like me, this means the entire passage through this scenic state is spent in a race to make any bridge under 20 feet in clearance.

With Cygnus II’s mast down, not many bridges pose a problem, but for sailors, the two on-the-hour bridges at Wrightsville Beach, separated only by a couple of miles, can waste a couple of hours. Luckily, we pass under both, feeling sorry for the waiting yachts.

Although the ICW is “protected,” there is more than ample open water. In bad weather, the rivers and sounds – the Neuse, the Cape Fear, and the Albermarle Sound in particular – can challenge any yachtsman. It’s not uncommon to see countless yachts “double parked” at Coinjock Marina for a couple of days waiting out the weather.

Experienced boaters know that these waters deserve respect, as they can and often do make passages challenging and, at times, downright hair-raising. The Albermarle Sound may not look like much on an east coast chart, but those 20 miles can seem like a lifetime on a boat that travels at 10 knots or less when the wind’s kicking up from the west.

One of our favorite side trips is east to historic Manteo on Roanoke Island. Another, when we can afford an extra day, is to pass up the Pasquatank River, which rivals the Waccamaw (and may be even a little prettier), stopping in friendly Elizabeth City and then through the Dismal Swamp, conceived by George Washington in 1763, and up into the commercial bridge-infested waters of Norfolk.

On this particular trip, weather was a significant factor, and delays (which we don’t usually experience) ranged from fog, wind and storms, to heavy rains that brought large trees floating down the normally peaceful Hudson River. The usually relaxing and pretty Erie Canal, reopened after several days of high water, is a harrowing experience with buoys way out of position, terrific turbulence from dams and locks, as well as some pretty impressive tree trunks and other debris we literally pushed out of our way with the bow in order to make our way into the locks.

Looking back, by far our easiest day’s run on this passage was in fact the offshore leg before passing New York City, paralleling the coast of New Jersey. While Mike and I love the inside passages, they are not always as relaxing as the scenery would make them appear, and this straight shot offshore with consistent water depths, no shifting shoals or traffic competing for narrow channels was an absolute pleasure, a respite.

Dublin and Shelby do not share this opinion. They like the land up close and personal, and prefer brief intervals between morning and evening docking or mooring, the former being far preferred. For the crew of Cygnus II, we’ve come to learn to like the good with the bad, and even though it’s sometimes easier offshore, we’ll take the challenges – and the rewards – offered on the inside. 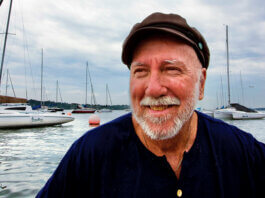 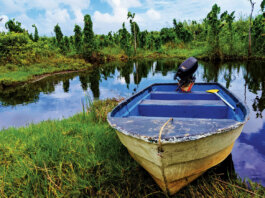 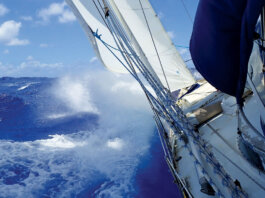