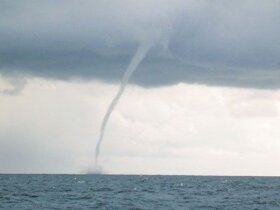 Water Spout: Are They Dangerous?

Herb Hilgenberg is the cruiser’s savior. He is the voice on the airwaves that heralds good news and bad on the ocean waves. He gives a heads up for every sailor’s worst nightmare. He does his best to keep you out of the path of ‘The Perfect Storm’ and helps you by weaving a slalom course through the lows that roll off the coast at regular intervals. He is my favorite weather God. Don’t go offshore without him!

Herb Hilgenberg immigrated to Canada from Germany, and received his MBA from University of Toronto. When itchy feet struck in ’82, he sailed off over the horizon with his wife Brigitte and his 14 and 6 year old daughters, heading to the Virgin Islands on South Bound 11. Without decent weather forecasting-no major weather system was predicted-they got hammered on the passage. After cruising for a year the family sailed back to the Great White North, but were off again in ’84, Bermuda bound. There they settled for 10 years.

What began as a hobby, helping a few cruisers here and there, by giving a decent weather forecast via SSB, gradually turned into a full-time, unpaid job-hobby. Herb became chairman of the Ham Radio community in Bermuda, working closely with police and Coast Guard in cases of emergency at sea or during hurricanes. Herb and his wife retired back to Canada in ’94, where he set up shop with his 150 watt transceiver, out of his basement, with his roof sprouting satellite dishes. He will maintain radio contact, notifying Coast Guard in emergency situations and act as go between for vessels in distress. Herb is like a guardian angel who watches over his flock-or fleet-and delivers them safely to their destination.

Tune in to 12359.0 megahertz at 1930 UTC to begin check-in. Herb likes to hear from each vessel during check-in so he knows who is waiting for his forecast. If you are checking in for the first time, he wants to hear a few details, such as where you are and where you are heading, so he can work out a safe passage for you through the weather patterns. At 2000 UTC Herb will come on air as South Bound 11 VAX 498 and go through the list of boats he has heard from, and will pause for a minute for you to call in again if you didn’t hear your name listed.

Sometimes the propagation isn’t terrific at the beginning of the ‘show’ but generally gets better. He will try to do an area before it gets worse. Herb starts off with boats closest to the coast and works his way through the fleet, getting to boats in the Bermuda area next, then down to the BVI area, Bahamas after that.

If you check in with Herb, you had better be prepared to be patient and play by his rules. He wants to hear your exact position and about the weather conditions in your area at the beginning of your personal session. It is handy to have a pocket recorder, because it can be difficult to write all the info he is relaying to you. And you don’t want to miss a crucial piece of info because you are too busy writing. I usually have photocopied little charts handy to draw the fronts, lows and highs in, so I can create a better visual image. The crew appreciate it as well. If you tune in to get his forecast then you had better be prepared to follow his advice. He gets very impatient with those who get his free forecast, and then sail straight into the teeth of a gale he is trying to help you avoid. I have learned more from Herb about weather than from any book, remaining vigilant to forecast patterns, comparing my own forecast with his. It is best to keep opinions to yourself-he doesn’t have the time-or patience-for debates, and will let you know in no uncertain terms if you are wasting his time!

Herb spends quite a bit of time preparing a 4-5 day forecast for each boat, starting at 11 AM downloading data from 2 or 3 different weather models, compiles the info, analyses it, adds his years of experience to the brew and tries to plot the safest course through the weather systems so that you don’t get pasted. If he suggests you turn around and run for it, you better do just that, or withstand the wrath of Herb as well as the weather Gods. He has sent me tiptoeing around lows rolling off the coast, catching the backsides to slingshot me on my way, and helped me avoid the worst of the system by staying on the right side of it as it moves through. Herb is very conservative when it comes to sending you off, reluctant to have boats go out in 30 knot headwinds, when if they wait a day or two can go out for a bit of a sleighride instead. He deals mainly with cruisers who are normally a mom and pop operation, shorthanded, retired, or getting there, who have limitations with boat and crew. Herb wants to make sure they get to their destination safely. To boats being delivered by professional crew he might seem a tad conservative, but his aim is to keep us out of trouble. I know my clients want their boat delivered in one piece, even if it means being behind schedule. Herb is usually spot on with forecasts-when he says the front will move through at midnight you can usually set your watch by it. Its a bit of an onboard joke sometimes-‘geez Herb, that front was 10 minutes late’. But knowing when you have something on its way gives you a better picture of how to prepare. The crew are briefed about what to expect, and being organized with a reef taken in before the @#$% hits the fan is always a good idea.

Herb will also give waypoints for Gulf Stream entry and exit, so that you spend the shortest possible time in this moving lethal serpent of current. And he will urge you to slow down if need be to avoid arriving at the stream if the wind is blowing a gale against the current-which can make it incredibly nasty.

Herb spends so much time at his ‘hobby’ he even works on Christmas Day. For 51 weeks a year he is the beacon bringing you home safely. He does it for the love of it, but wouldn’t say no to a donation. You can send them to 5468 Hixon Ave., Burlington, Ontario, Canada, L7L 3S2

It is sometimes helpful to drop an email to [email protected] letting him know your vessel details and plans before the passage. In case of emergency he can pass details onto the appropriate people, be it Coast Guard, BASRA, VISAR and help coordinate rescue efforts in worse case scenario. He also helps locate overdue vessels by giving his fleet of up to 80 boats, and ships in the area, the APB. Someone, somewhere usually comes across the missing boat snugged up in port, and will pass on the info. ‘Your Mom called looking for you, better call home.’ It gives your people at home peace of mind knowing you have a guardian angel like Herb watching over us.