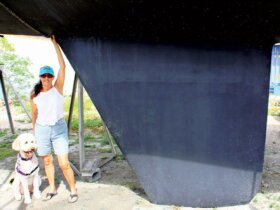 Trinidad has a well-deserved reputation as a place where many Caribbean boaters head in the summer and fall to be below the hurricane belt and to find virtually everything they need in the way of marine supplies, parts, and services.

It’s a place that cruisers like Jack and Susan (“Fred”) Webb find hospitable the rest of the year, too.  The couple sold their house in Arlington, Virginia in the United States in 2000 when Susan retired from her job at the Pentagon.  Jack retired from the United States Air Force and was a pilot for Continental Airlines.  They live aboard their boat, Denali Rose, keep it at Chaguaramas, and fly to Alaska in the summer.

With the expansion of the cruising population of retiring American baby boomers holding discretionary funds they can spend on boats and travel, others like the Webbs are likely to follow.  Trinidad is ready for them. A group of boating businesses established Yacht Services Association of Trinidad and Tobago (YSATT, pronounced “why sat”) 13 years ago to cater to consumers of nautical services and products.  The group now has more than 100 members and the country’s government is poised for action, too.

“The leisure marine industry is one of seven sectors targeted by the government for further development, along with the industrial marine industry and ship building,” says YSATT President Tommy Johnson, owner of CISL Marine.

YSATT serves as an industry government liaison and lobbies for favorable rules such as those that allow in-transit cruisers to bring boat parts and related repair materials into T&T free of duty and V.A.T.  The association is based in Chaguaramas, a full-service port on Trinidad’s far northwest peninsula, a drive of a half-hour or less from Port of Spain.

There, the group works closely with Customs and Immigration to smooth entry and clearance procedures and even provides furnishings, air conditioning, and television to make the Customs office, located at CrewsInn resort, comfortable for arriving boaters.  CrewsInn also has the Lighthouse Restaurant, a bank, grocery store, and other convenient shops on the grounds.

In 2004, YSATT introduced a water taxi (hailed on channel 68) from a dock at Crew’s Inn to various marinas and moorings in the bay.  With assistance from the Tourism Development Company Limited, YSATT acts as the Chaguaramas tourist outlet for maps, advice, brochures, and entertainment event information.  Manager Sharon McIntosh and Administrator Gina Carvalho can tell you how to get to the Maracas Bay beach for a “shark & bake” sandwich, the best night to go on a turtle watch at Matura, and what evenings the island’s famous pan yards are open.

The Webbs enjoy being part of the thriving Chaguaramas community; they stay informed by word of mouth and by monitoring the local cruisers net which airs every morning from 8:00 – 8:30 a.m. on Channel 68.  They also have high praise for help provided by Jesse James, who operates Members Only Maxi Taxi Service, and is known for going the extra mile to help.

“He’s the patron saint of every Trinidad boater,” says Fred Webb, who received outstanding assistance from James when her husband was injured in a fall on the boat.  She says that medical care is readily available on Trinidad. “We had a great hospital experience here.”

Jesse James received the South Bound II Blue Water Sailing Service Trophy in May from Denis Webster, Commodore of the Florida-based Seven Seas Cruising Association (SSCA), and he was honoured in the dedication of the 2007/8 edition of the Boaters’ Director of Trinidad & Tobago.
People like the Webbs have found that Trinidad, with its low prices, is an economic choice as a base.  “When you go cruising, you can provision your boat at Price Smart,” says Fred Webb.  Besides galley goodies, plenty of boat stuff is available at places like the large Chaguaramas Budget Marine outlet the company built in 2002 after first opening on Trinidad in 1996.  Along with other chandlers, the store stays busy serving the huge local power boat and fishing communities as well as foreign “yachties” who come during Carnival and hurricane season. “The only quiet time is April/May,” says Budget Marine’s manager, Ruth Lund.  “Anyone coming from the south stops at Trinidad.”

YSATT instituted a small trade show in 2002 that has grown, with more than 30 exhibitors last year.  Boaters are welcome to attend the 5th Annual Marine Trade Show scheduled for Saturday, October 13, 2007 from 11 a.m. to 5 p.m. at Sweet Water Marina.

Chris Goodier is the editorial director of All at Sea and a St. Croix-based freelance writer.  Her articles and photographs have appeared in numerous publications including Caribbean Travel & Life, Discover St. Thomas/St. John/St. Croix, and Caribbean Meetings & Events.