Casting Off With Kids 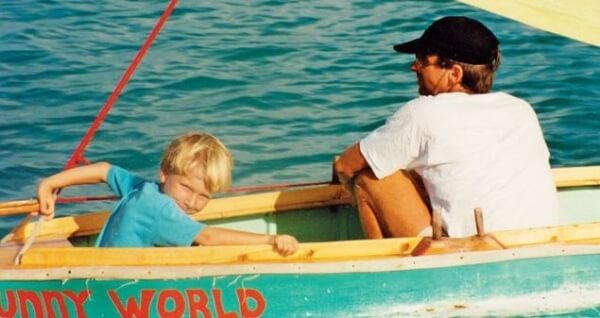 Since we made the decision to build a boat and cruise long before we considered parenthood, our son was born into a world of life jackets and safety lines. As we readied the boat for the first ocean passage, friends thought we were nuts; some even asked if we planned to take him along. We did – logging miles and memories during seven years of voyaging, all with no regrets.

Cruising with kids is complicated. Just like the weather, they change when you least expect it. There’s no right or wrong time to set sail with an offspring – each developmental stage has its pros and cons. Babies tend to sleep a lot and stay where you put them, but at sea they require a full time parent for their endless needs. A new mom recounted her baby’s maiden voyage: “It was like a ten-day trip in a submarine. By the time I figured out the routine, we were there.”

Prior to Insurance – Hurricane Preparedness – Sink your Boat!

Training young mariners has parental rewards but extra sleep isn’t one of them.

Another option is taking teens – those clever, aspiring adults with sharpened reasoning skills who dinghy around solo making friends in every port. Those outward social skills, however, can make it difficult to take them away in the first place. One family we met waited too long to cast off. The 13-year-old was rising to the adventure but the 17-year-old was working to scuttle the mission because she missed her life back home. A deal was struck, everyone rejoiced when the eldest was sent to stay with Grandma and the rest of the family sailed on.

Somewhere between the extremes of toddler and teen is an almost perfect stage of childhood when kids fit especially well on a boat. With self-reliance in full bloom, they’re eager to master the milestone skills needed on a boat. A rich imagination and an open spirit of adventure help make the mid-life of childhood a favorable time to weigh anchor.

By the age of four, our son could swim confidently and row the dinghy solo; at six he could sail a small boat, carry a bag of provisions and help with a medley of boat chores. By eight, he was standing a day watch in good weather. His ten-year-old buddies drove outboards responsibly and the twelve and up gang were blossoming into seriously good crew.

Sailing With Charlie: The Off Season

All cruising families face the same set of challenges and safety tops that list. No matter what kind of boat you have, it’s important to beef up lifelines and hand-holds that a child’s reach and stride can grasp. Since the ocean rarely allows a “do-over”- rules at sea are not to be broken. Keep them short, simple and alter as junior’s responsibility grows.

Health follows safety in the order of “what-if’s”. Obviously, some events are impossible to prep for but a smartly stocked first aid kit will weather most bites, stings, cuts, bumps and bruises. Before setting sail we visited both a physician and pediatrician for advice and prescriptions which, fortunately, we never had to use.

Before the internet and Wi-Fi that now floats freely in most anchorages, schooling was a major concern for sailing parents. Some we met went with canned programs, others built their own; we did a bit of both. Although it’s no longer necessary to carry a full library onboard, those old-fashioned page turners still come in handy. Favorites act as security blankets, re-read a hundred times; reference books wear thin; and one-time reads are perfect for trading.

There’s one issue that floats to the surface for all cruising families – where are all the kids? Sadly, they’re not in every anchorage and when you find them, it’s often a fleeting encounter. To compensate, some choose to buddy-boat; others work at meeting shore-side families. We took it as it came, feast or famine. Guests for our son’s fifth birthday were adults only, wild and crazy cruisers who showered him with attention and didn’t cheat during games. A year later, another anchorage, we had to move the party ashore because there were so many kids.

One year we found the mother lode near Grenada’s Hog Island when thirty boat children pulled in and parked for hurricane season. Parents tried to control things, leading field trips to the rain forest, riding the last Bedford bus and taking the entourage to experience carnival. But it was the kids who were in charge that summer. They took over Hog Island, heading there daily with oars and sails; building forts; inventing games, hiding and finding buried treasure. Each grew in confidence, stature, wisdom and wonder. They were Tom and Huck on the Mississippi and the world was their mangrove oyster.

Jan Hein and her husband,Â artist Bruce Smith, divide their time between the Caribbean the Pacific Northwest with a boat and a life at each end: www.brucesmithsart.com