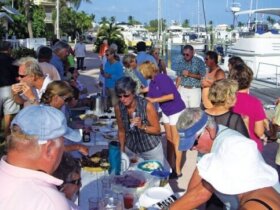 How to Throw a DOCK PARTY

“I am happy to report that the Caribbean 1500 is going strong in 2009,” Steve Black said in late August. “Like a fine wine, we are improving with age and experience.” America’s oldest and largest offshore cruising rally will depart from Hampton, Virginia on November 2 and arrive in Tortola, British Virgin Islands seven to 12 days later.

Black, the founder and president of the Cruising Rally Association, is expecting more participants this year than anyone might have expected with a soft U.S. economy. “Our increased turnout this year is the result of some pent up demand from those that put off the trip last year, improved recognition, a more experienced group of volunteer crew members, and the return of many past ralliers looking forward to the festivities supporting our 20th running of the event,” said Black.

This year’s fleet will sport an international flair. In addition to the usual contingents from the US and Canada, sailors from Germany, Japan, the UK, and Ireland will join the fleet.

“Five of our entries are scheduled to participate in the World ARC, and a growing number of European skippers cruising in the US have elected to join us this year,” said Black. “The 20th Anniversary fleet is shaping up to be an interesting group. We have veterans of past rallies including several who participated in the first Caribbean 1500 in 1990. The first-time participants include four families with children. And it is always fun to have sailors from other countries involved.”

The boats will pull into a different destination this year. “Our new BVI host marina, Nanny Cay, will help make this the most festive arrival so far, with a hospitality center, daily parties, live bands playing island music, and a beach barbecue following the awards presentation,” Black said.

Over 1000 yachts and 4000 sailors have participated in the Caribbean 1500 since its inception.