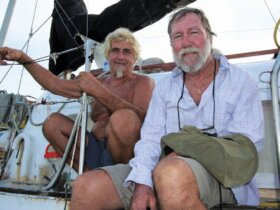 After traveling all around the world for work, pleasure and adventure, artist and sailor Lilo Nido settled in to a simple life in Grenada. She lives near the popular but unpopulated Hog Island and the extraordinary story of how she got there read's like an adventure novel.

Born and educated in Switzerland, a career in photography sent her on a journey to Africa. Taken by the raw beauty, Nido made a bold move and from behind the wheel of an old VW bus, saw the country one mile at a time, publishing images along the way.

Returning home she jumped into the fashion scene as a magazine editor and photographer. "I traveled all over the world, all islands, everywhere," she recounted. Since boats go with islands, they became part of her life. "I saw boats, was fascinated by them. I sailed with friends whenever I could."

After a lengthy backpacking adventure in Brazil and through South America, she joined a boat sailing from Ecuador to the Galapagos. That led to another boat, another cruise and an immersive course in sailing that took her through the Panama Canal, to Honduras and on to Key West.

"In America there are so many boats and I got so excited," she exclaimed. "I wanted one!" In Ft. Lauderdale she found her dreamboat, a 42-foot Cheoy Lee sloop but like most vessels, it had a few issues. The mast came down on the first sea trial precipitating a stay in the yard that stretched into a year. Nido, never aimless, used the time to get her Captain's license, learn diesel mechanics, astro navigation, sail maintenance and splicing.

Finally Tartargua and her owner were ready to tackle the world so, with a friend aboard, they set off slowly down the thorny path towards the Caribbean. When they got to the Virgin Islands, nature initiated them to the tropics with Hurricane Hugo. The boat, tied into the mangroves, sustained no damage but there was plenty of work to do. Using a ham radio, Nido lent a helping hand in St. Thomas; fluent in six languages, she could get word to friends and family. Remembering the camaraderie she said: "I remember it as a wonderful time – I speak so many languages, met so many nice sailors."

The voyage continued south, down the island chain, to the Grenadines, Grenada, Venezuela and northward again. Nido made drawings along the way: renditions of birds and fish observed while cruising and diving.

During one visit to Grenada she met Chris Mast, the creator and owner of Art Fabrik, a batik art store located in St. Georges. Occasionally lending a hand in the studio, Nido's hobby turned into a trade. "I discovered with the wax that I like to draw." She was able to balance art and sailing until a Grenadian fellow convinced her to stay.

Eventually she became a partner in the batik business. "When I decided to stay in Grenada, it was because of Art Fabrik. I love this business." She is both designer and co-owner or as she describes it, "I'm one of the beating hearts."

Art Fabrik, founded by Mast in 1986, creates wearable art and accessories for women, men and children. The two talented directors are assisted by up to 45 Grenadians who work in the studio or from home. Once the all natural fabric arrives from New York or England, it is cut, sewn and adorned by hand. Using local beeswax, batiks evolve from a labor intensive process with results that mimic the character and color of the Caribbean.

Visitors to the St. George's Boutique, located near the famed Carenage, can learn about the process watch-ing working artisans in the centuries old courtyard.

Travel guides including Conde Nast, Lonely Planet and Fodor's list it correctly as a must see destination.

Nido's Grenada home has remained Tartargua, despite the wrath and destruction caused by Hurricane Ivan in 2004. With only hours to spare, she warped the boat into the mangroves in Woburn Bay and went ashore seeking shelter. "I might not have lived if I'd stayed on the boat," she said. In a packed house of friends and neighbors, they rode it out until dawn when a VHF report came from the Bay. "Someone was checking the boats," she said. "So much damage but I heard, 'she's swimming.'"

The boat was afloat but like every vessel around, it received multiple wounds. Art Fabrik's studio and boutique were also seriously damaged and repairing everything has taken years.

Somehow Nido finds time to show her work in local galleries and in 2010 contributed four batiks for a world exhibition in Shanghai, China. Sitting in the workshop, cloth flowing from her lap, she affirmed, "This little business is unique – inspired by art and soul."

Jan Hein and her husband, artist Bruce Smith, divide their time between the Caribbean the Pacific Northwest with a boat and a life at each end. www.brucesmithsart.com