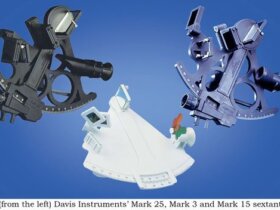 “We were looking for the first five,” said Angus Fuller, captain of Matelot, an 80 foot Southern Wind out of Great Britain.  In fact, after 11 days and 12 hours at sea, powered by sail and engine, owner Bruce Dingwall, Fuller, and the crew clocked into St. Lucia first of the 233 December ARC arrivals, at 9:15 a.m. on Friday, December 7.

World Cruising Club Manager Andrew Bishop was on hand to greet the sailors along with General Manager of Rodney Bay Marina Cuthbert Didier and St. Lucia tourism representatives armed with a festive welcome basket and round of rum punches.

“It was fantastic training for this ARC,” said Fuller, after securing the lines.  “They do a good job.”  He was accompanied by his fiancée, Jessie Cuthbert, on her second ARC crossing, armed with frozen meals she prepared ahead to feed the crew.  “It was pretty good this time—we were lucky,” said Cuthbert.  “Some of the boats had swells, but it was really nice sailing, very pleasant.”

Trinidad-born owner Dingwall acquired Matelot in April and plans to base her out of Antigua for winter charters.  “The boat performed beautifully,” he said.  “It was unbelievable—we just flew.”  After two days on St. Lucia and securing the Cable & Wireless Trophy for first arrival status, Dingwall headed back to England and the boat left for Antigua to pick up its first guests for a fully-booked season.

Over the weekend, another dozen or so yachts followed, with a close finish for two 60-foot racing yachts.  The Croatian Volvo 60 AAG Big One finished just ten minutes ahead of the British Carrol Marine 60 Venomus—a slim margin of victory, considering that they covered 2,700 nautical miles over 12 days of racing.

Despite an emergency pause at sea to evacuate a crew member scalded in a galley accident to a cargo ship, AAG Big One was the first ARC yacht to complete the course in 2007 under sail alone.  But the second, Venomous, was victorious in the handicap adjusted results for Division VII Invitation Racing.

One by one, the big beauties and flags of many nations started lining the A Dock, as some skippers met their personal goals for the crossing. “We wanted to be in the first 20,” said owner Richard Morgan on Monday morning as he and the crew aboard Blue Destiny toasted one another with champagne.

As each boat arrived, there was much horn-blowing and welcoming applause from other sailors, plus the basket full of St. Lucian fruits, hot sauce, Bounty Rum, and other goodies.  Each day, at the ARC office on the wharf just past Scuttlebutts, boat names and arrival times were entered by ARC staffers on a long wall chart.

There were numerous highs for the participants and some lows when word went around of injuries.  A particular loss for all was involved in the ARC was the death of one skipper, John Thompson, who never recovered consciousness after sustaining a severe head injury aboard Avocet December 7 mid-Atlantic.

Other ARC boats were involved in desperate situations while at sea with happier outcomes.  Two British ARC yachts, Tallulah and If Only, summoned assistance from the Spanish Navy, employing advance ARC briefing procedures, to rescue migrants from the African coast.  Other ARC sailors from Gigi and Navillus rescued crew in difficulties from non-ARC boats during the crossing.

On December 21, many skippers and crew gathered for the ARC prize-giving, referred to by Didier as “the Grammy Awards for yachting in the Caribbean.”  Prizes, both fun and serious, were awarded in a flurry of trophies and good wishes. The youngest participant (seven month-old Jorgen Heli-Hansen from Norway) was recognized, as well as the youngest skipper (Ben McGill, age 19),
oldest skipper (Sobleslaw Zasada, age 77), and first female skipper on corrected time (Georgina Eggleton, age 22.)

Tiny Ariel, 7.63M, a Nordic Folkboat from Great Britain, was the smallest boat in the fleet and won the WCC Award for best double-handed performance on corrected time.  The last boat to finish after 24 days at sea was Nic Gray’s Christiana, and all the boats and sailors from first to last were true winners for completing the crossing.

“You are all ordinary people who have done an extraordinary thing,” said Didier.  “You are ambassadors for St. Lucia and are an amazing bunch of people.”

The course record of 11 days, 5 hours, 32 minutes, and 30 seconds set last year by Capricorno still stands—and entries are now being accepted for ARC 2008, which will start from Las Palmas de Gran Canaria on November 23, 2008. www.worldcruising.com/arc

St. Lucia is well-known as one of the Caribbean’s most romantic spots, so it’s inevitable that ARC participants might fall under the island’s spell.  Ruth Sherliker, from Portsmouth, England, jumped up and down on when Minnie The Moocher  rounded Pigeon Point andcame into view late Monday morning, December 10.  Waving his arms in response on board the distinctively-orange 37-foot Minnie, was Sherliker’s fiancé, Martin Banfield.

The couple decided, shortly before the ARC departed on November 25, to be married on St. Lucia—and Banfield left. Sherliker picked up her engagement ring in England, flew to St. Lucia, ordered a tropical bouquet, and brought the ring to the dock for Banfield to officially place on her finger.  The happy couple was reunited, and skipper Anthony Richards had reason to be pleased, too—
Minnie took a second on handicap in the Division II Royal Ocean Racing Club IRC Racing Division.