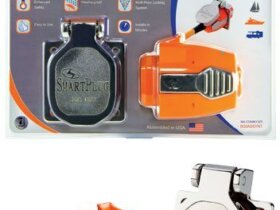 “To think that a lot of people consider it very difficult to enter a harbor without an engine…it depends on the harbor, of course, but if they would only try it, perhaps they would never again press the starter. It is so much more genuine to come in under sail, listening to the silence, without unnecessary words or gestures.”
-Bernard Moitessier, “The First Voyage of the Joshua”

After sailing close-hauled all day en route from Anse Marcel at the north end of St. Martin, I was determined to sail right into the steep-sided cove at Ile Fourche, which meant clawing to windward in the stiff trades. The sailing was exhilarating, each puff sending the leeward rail awash. The boat and her crew were in their element.

The bay at Ile Fourche is small and protected from the easterly trades, and it’s relatively accessibly under sail. Though you must enter directly upwind, the steep cliffs that surround the cove are wide at the entrance, gradually narrowing the further in you sail. Aside from two well-charted rocks, it’s steep-to right up to the cliffs.

As we approached the harbor, the wind became increasingly erratic, bending around the rocky highlands and funneling in every direction. The sun was behind us, setting in the west, and cast an otherworldly glow on the island, enhancing the illusion that we were landing on the moon. We held each tack as long as we dared, galloping towards the cliff faces on either side of the entrance at seven knots—I could see every crevice in the rocks in super-fine focus. Farther in the cove, our tacks became shorter and shorter. We struck the sails and grabbed a mooring as the sun sank in the west. The only sound was the breeze echoing off the lunar slopes of Ile Fourche.

Anchoring under sail requires an intimate knowledge of your boat. How fast does she come through a tack? How quickly does she accelerate and stop? How hard is it to strike the sails? The maneuver itself is fairly straightforward, but hesitation can spell disaster unless you have a bailout plan—even if it means firing up the diesel.

Start by finding a mooring ball and sailing onto it. This forces you to sail to a spot rather than just dropping the hook any old place. Learn to control your speed by feathering the sails and the helm. To windward, I find it easiest to maneuver at speed, which means I fly as much sail as the boat can handle for the conditions. To slow down, slack the mainsheet or luff up with the helm. Just before the mooring, when you’re sure you’re high enough to weather not to miss it, furl the jib to slow down. Luff up at the ball, drop the main and open a beer.

Off the wind, I find it easiest to sail under mainsail alone and slowly let the boat amble on down to the mooring. Once abeam of it, bring her head to wind, drop the main and grab the mooring line.

Anchoring can be even easier, as you don’t have to find a specific spot. The challenge is getting the anchor to dig in without the sternway provided by an engine. My yawl Arcturus will actually sail backwards by backing the mizzen. In a sloop, find your spot and sail toward it. Luff up and drop the anchor once the boat has stopped drifting forward. To get the anchor to set, back the jib as you pay out the anchor rode, as if you were heaving to. The bow will blow off and you’ll drift to leeward. Once enough scope is out, make fast the anchor line and wait. Once comfortable that you’re going to stay put, strike the main and furl the jib. Now you can open that beer.

While it make take a few years and a few mishaps before running reef breaks in the Pacific single-handed like Moitessier, learning to anchor under sail can add an entirely new dimension to your sailing. Instead of lumbering under power the last few boring miles into a harbor, you can experience the exhilaration and satisfaction of sailing in. That afternoon cold one now comes enhanced with the flavor of accomplishment.

Andy Schell is a professional captain and freelance writer, based in the Caribbean, Annapolis and Stockholm, depending on the season. He lives aboard his yawl Arcturus with his fiancée Mia.