Tom Pace has spent a lifetime on the water enjoying all kinds of watercraft. With all of that experience – combined with friends who also had a tremendous amount of time on the water – he was able to develop a custom support vessel for his passion: Stand Up Paddleboarding. The Aloha Express is the first of its kind purpose-built SUP chaser.

Launching his first boat at eight years old, he has sailed and motored on every conceivable vessel and even enjoyed being a professional windsurfer for a period of time. “Sail, power, one hull, two or three, I didn’t care I just like being on the water,” Tom says.

After moving back to his childhood home, Pensacola, Fla., from Hawaii he took up his passion for SUP and realized that to get to some of the places he wanted to visit on his he needed a better way to get there than struggling “uphill against wind and current.” In Pensacola – as in many places – some prime waters for paddlers are difficult to get to because of a lack of roads by land and contrary wind and currents via water. A transport vessel that could get the boards to these prime locations would allow for some spectacular paddling trips. 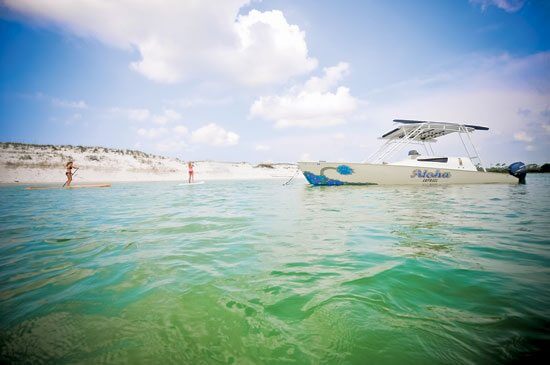 An innovator who realized that no matter what boat you owned there was always some kind of modification that could be done to improve things, he decided that he would build a project boat to address all of the issues related to transporting SUPs over the water. He soon realized this would be tougher than it might seem.

Originally he tested his father’s 45-foot Grand Banks East Bay with a five-foot swim platform. He discovered that transporting SUPs was a difficult and uncomfortable task. With boards tied to railings or other locations, gel coat and boards would get chipped and damaged with exposed skegs cutting shins. Launching even from such a large swim platform could be problematic. There had to be a better way, and he was determined to find it.

Mike also had a background in board sports and was a perfect partner in designing this custom craft. After considering everything from landing craft and commercial oil support vessels to pontoons and deck boats, they determined that a hull Bredesen used for an all-electric concept boat he had built would be the best option.

As the design evolved, they strengthened the hull and change the shape towards the middle and rear of the pontoons. There were many “what now?” points, Tom says, and the help of a talented local naval architect named Bill Preston proved invaluable. With Preston’s guidance and the knowledge, input and build know-how of Bredesen, many a meeting over fish sandwiches and cold beer produced a unique, innovative design.

The end product is the Aloha Express, a 30-foot power catamaran with a 13-foot beam powered by twin four-stroke 60 hp outboards. It is able to achieve an easy 20-22 knot cruising speed while sipping fuel at 3 to 4.8 mpg and a range of about 230 miles.

Unlike on a traditional catamaran, hinged cross members allow the whole vessel to flex in rough or choppy seas. The result is an exceptionally smooth and comfortable ride with no jarring.

A center cockpit area has a custom console and seating for up to eight people comfortably out of the sun. Forward and aft of the cockpit area are large trampoline areas that allow for easy boarding and launching of the paddleboards. Paddlers can lower their boards from a custom three-piece top (also designed to flex) that can accommodate up to eight 14-foot boards. The boards just slide down from the top over the edge of the trampoline and into the water. With the trampolines being at waist height, the paddlers can just sit on the edge and get on or off their boards easily. If they are coming back to the boat they can just sit on the trampoline, pull their board up by the leash and slide it up on to the storage rack.

There are plenty of luxuries as well. Enclosed cabin space in both hulls that can be entered via hinged canopies resembling something from a fighter jet. The whole boat is smooth finished, with simulated low maintenance teak decking and designed for comfort “with no toe knocks.”

Plans are in the works to bring this design to production. It is not only usable as a SUP transport vessel, but also provides a stable inshore fishing platform. It would work well as a regatta committee boat or other support vessel.

It seems Tom and his friends have developed not only the ideal SUP transport vessel that can get them to pristine and little paddled waters, but also a boat that will be popular for many uses.

Glenn Hayeshttp://www.HayesStudios.com
Glenn Hayes is a writer and photographer based out of west central Florida and has marine industry background spanning almost a quarter century. He can be reached through his web site www.HayesStudios.
RELATED ARTICLES
Stand-up Paddle Boarding