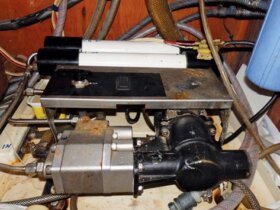 Ever Wondered About a Water Maker?

One island, two nationalities and 37 square miles. It’s impossible to experience everything Dutch St. Maarten and French St. Martin have to offer in one day. But, that was our challenge during a Christmas holiday cruise. The task proved even more daunting, which actually turned out quite delightful, because this was a three-generation trip: two twenty-somethings, two boomers and two seniors, one of which had just celebrated his 92nd birthday. The twenty-somethings chose to rent an ATV and the rest of us a car. There are taxis too, but a rental car lets you travel at your own pace. If we were on a tighter budget, there’s a public bus. For $2 one way, the bus route includes Phillipsburg, the capitol of the Dutch side, and Marigot and Orient Bay on the French side.

Our game plan called for a counter-clockwise drive of the island. Friends warned that the roadways in Simpson Bay to the west can get crowded during the morning commute. Therefore, we drove north first, from the eastern end of Phillipsburg towards Oyster Bay. The scene soon turned less city-like, with a few houses doting the hillsides on one side and a view of the Atlantic Ocean to the east. One point became immediately clear and would prove the theme of our day. That is, while the aftermath of 2017’s Hurricane Irma is still evident in manmade structures like tarp-roofed houses, shuttered shops and half rebuilt hotels, the natural world – flora, fauna, incredible beaches – are all as beautiful and inviting as ever.

The border cross between St. Maarten and St. Martin is hands down is the easiest in the world. No gates, go guards, no passport required. In fact, only a wood-framed sign, ‘Welcome to the French Side’, written in French and English. There was definitely a French feel, first evident in names on street signs. This je ne sais quoi inspired one in our group to suggest we find a bakery and French-style baguettes. This we did and more in L ’Express by Bacchus, a bakery and café located in a small shopping complex located after Orient Bay and before Grand Case. Baguettes, long, plain and still warm, along with baguette sandwiches, croissants, eclairs, fresh berry topped tarts and macaroons were a few of the offerings. Well fueled, we drove on.

Grand Case, a little town once known for some of the finest French restaurants in one few block setting, was on the sleepy side. The opposite was true a few miles farther in Marigot, the French St. Martin’s capitol. Here, a combination of passengers from the many cruise ships in port that day plus hotel guests on island for the Christmas-New Year’s holiday made for steady traffic and a sea of waterfront vendors. We strolled a bit, then drove up the hill to historic Fort Louis. Here, there’s a beautiful panoramic view of the harbor and Anguilla to the north. Built in 1789, and battered by recent storms, the fort still boasts stone walls and a few cannons.

It was driving west out of Marigot that two tandem ATV riders whizzed by in the opposite lane. We recognized them instantly as our twenty-somethings. They were en route to Orient Beach at the time, and we later learned that the beach – both nude and clothed sides – is as beautiful as ever. A few restaurants are open and perfect for a quick lunch.

A majestic monument on the side of the road marked our re-entry to St. Maarten. After that, there were several large hotels and resorts on this western part of the Dutch side.  This included Porto Cupecoy, complete with hotel, marina, shops and restaurants. We continued driving south, past the lush green of the 18-hole Mullet Bay Golf Course, to Maho Bay Beach. Huge crowds filled the sand, standing room only in some places, for one of the island’s signature sights. That is, jets flying directly overhead while landing at the Princess Juliana Airport. A sign warns ‘Danger’ as the jet blast can be harmful, but that didn’t see to dampen the enthusiasm.

The Simpson Bay Road bustled with afternoon traffic as we drove towards Philipsburg. A quick detour to the Buccaneer Beach Bar on Kim Sha Beach led us to the happiest of happy hours. First, the beach was gorgeous and filled with everyone from sun worshipers to watersports enthusiasts. Second, were the drinks. Our most senior senior thought it time to hydrate with a Pina Colada. He asked to split one, but we knowingly ordered one each for he and his wife. A 2-for-1 Happy Hour special instantly turned two Pina Coladas into four. Let’s just say he didn’t do a whole lot of shopping along Front Street in Phillipsburg that afternoon, our last stop of the day. But, I can guarantee that he, like the rest of us, had a very happy one day visit to St. Maarten-St. Martin.