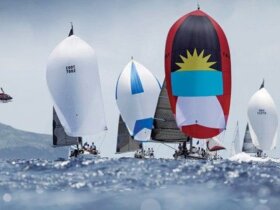 A rainbow of Sunfish sails filled St. Croix’s Teague Bay on the weekend of January 19th and 20th in tribute to Bill Chandler. Chandler, a longtime marina operator and marine community activist who passed away last year at age 89, was an avid sailor. More importantly, he took the time to train many of the islands junior sailors. How fitting, then, that one of his perhaps best known protégée’s, Peter Stanton, won the inaugural Bill Chandler Sunfish Memorial Regatta.

“I wouldn’t be the sailor I am today if it wasn’t for Bill Chandler,” says Stanton, who placed top junior and 7th out of 104 with Chandler coaching him and nine others in the 1999 Sunfish World Championships held in Ponce, Puerto Rico.

Twenty-three sailors, ranging in age from 10 to 74 years, sailed 18 races the first day with winds blowing 18 to 22 knots over choppy seas. The next day, winds were lighter yet very shifty. Sailors’ scores were used to place them into either the Silver or Gold Fleets, which the next day sailed an additional 12 races. Everyone rotated boats to maintain fairness due to some boats being faster than others.

Stanton, who narrowly bested his brother Scott for the championship, explains, “I had the luck of the draw in boat picks, because when it comes to sailing, Scott is one of the best around. He has been out of sailing due to his career and new family, while I have been on the water coaching, racing, or just out for fun and I think this made the biggest difference, if indeed there was any difference between us. We were both tactically sound and sailed as fast as the boats would allow us. Guess you could say I just got lucky this time.”

“Bill devoted many years to the St. Croix Yacht Club’s junior sailing program, teaching everything from Optis to 420 racing,” says Karen Stanton, regatta director and founder. “But his favorite boat was the classic Sunfish. Everyone can sail that boat, from the young sailors to the older ones, Bill would say.”

Lasers, Optimists and 420s are among the most popular dinghies on the Caribbean’s racing scene. However, there have been and are strong fleets of Sunfish in the Virgin Islands, Puerto Rico and Curacao.

“The Sunfish is the most challenging boat I have ever sailed,” says Stanton. “For how simple they are, you really have to be Johnny on the Spot about what’s happening to the boat. Be it wind or waves, there are so many little things you can do to get the boat going fast.”

Will there be a resurgence of Sunfish sailing in the Caribbean?

“I’d like to be positive about the future of the Sunfish class,” says Stanton.” A lot of racers haven’t really sailed a racing sunfish before; there is a big difference. I hope to grow the class and keep it growing on St Croix. The boat is a great transition after Optis. Let’s face it, if you’re not the correct size or weight for a Laser you’re going to most likely get hosed in big winds or light winds. I have seen in the Sunfish class that no matter what size you are there is a chance of being able to win in any conditions. A great example is our manager Jens Hookason who won a Sunfish National Championship at age 16. He was one of the lightest competitors and the breeze was kicking.”