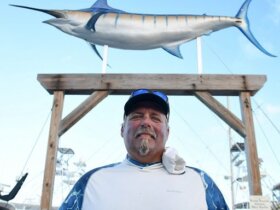 Fishing aboard the 65’ Hatteras, Livin the Dream, Basinski caught her winning fish off the south coast of St. Thomas approximately 15 miles northeast of Christiansted, St. Croix. “We were working our way north across the South Drop when we saw a lone frigate bird,” says Basinski. “We kept following it and circling around. Even though we couldn’t see any fish, we knew the bird saw something there.”

Basinski’s dolphin came up as a double-header along with a 26.4-pounder hooked at the same time as fellow Livin the Dream angler, Ryan Senff. Senff brought his fish to the boat first followed by Basinski boating her whopper after about a 15 to 20 minute fight. Senff fish earned him the third largest dolphin prize.

Basinski’s first place fish was about 20-pounds shy of the over 55-pound criteria to win the tournament’s ultimate prize – $25,000 in cash.

The second largest dolphin, a 30.3-pounder, was caught by St. Thomas teenager, Colette Cogan, fishing aboard the 31’ Bertram, Hookie II. “We had a great day,” says Cogan. “We saw birds and then my Dad and I hooked up at the same time. He reeled in his fast. It took me about 20 minutes. I saw it jump a couple of times during the fight, so I knew it was a good size fish.”

In fourth place, Mark Blackburn boated a 26.3-pound dolphin aboard the Backlash. Danno Gerritsen on Marlin Etc. caught the fifth largest at 25.4-pounds; Tamika Turbe, reeled in the sixth largest, a 25.0-pounder from Emanuel; Jared Buckstein on Backlash brought in a 26.4 pounder for the seventh largest; Gilbert Laban caught the eighth largest at 24.0-pounds off Emanuel; Fred Kopko the ninth largest, at 23.5-pounder aboard Marlin Etc.; and Jeremy Austin rounded out the top ten largest dolphin with his 21.6-pounder off Keepin It Reel.

“We were out fishing two days before the tournament and scouting where the fish were at the same time. It paid off,” explains Emanuel’s Capt. Alvin Turbe. “We ended up burning a lot of gas, but we also found fish all day long.”

A fleet of 16 boats and 68 anglers competed in this year’s 19th annual Dolphin Derby. Four boats donated fish to the host Virgin Islands Game Fishing Club, where this was the featured entrée at the Awards Dinner held May 5.

The tournament was sponsored by Budget Car and Truck Rental and Glazer’s Premier Distributors, LLC.

The Virgin Islands Game Fishing Club’s next event is the Memorial Day Tournament, May 24 to 26, followed by the July Open Kid’s Tournament on July 6th, and the 51st Annual July Open Billfish Tournament, set for July 9 to 11. For more information, call (340) 775-9144, Email: [email protected] or visit www.vigfc.com