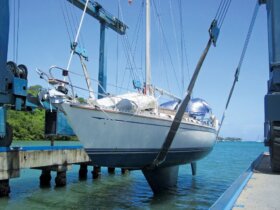 Learning and Planning For Hurricane Season

Club members are looking ahead to the February 16 & 17 Budget Marine Valentines Regatta, similar to their December event with a total of five races planned for Saturday and Sunday, and classes for Racers, Racer Cruisers, Cruisers, and Fun Cruisers (Liveaboards). Registration is February 15th evening at Jolly Harbour Golf Club. All details and an Online Entry Form are available at www.jhyantigua.com/regattas. In addition, JHYC members race EVERY Saturday from 14.05 and ALL Classes are welcome.

Commodore Escrich reports that his club, with the International Waterski Federation, organized and held the first International Coaching and Development of Waterski Seminar of the Panamerican Confederation, from November 16 to 18. Coaches from Ecuador and Colombia and several Cuban entities participated, including Gran Caribe Hotels, Enterprise Group of Nautical and Marinas, and the Waterski and Jetski Team of the Hemingway club.

The Seminar, taught by coaches John Wood of the United Kingdom, Jean Michel Cau of France, and Larry Gisler of Chile, had theoretic and practice classes, supervised by Kuno Ritschard, President of the International Waterski Federation, and a member of the International Olympic Committee. At the conclusion, 24 participants received diplomas.

“As host of this first Seminar in Cuba and the Caribbean, the HIYC of Cuba is doing all possible to promote waterskiing with the hope to fulfill Mr. Kuno Ritschard’s request to celebrate in Cuba a national championship and have our country represented in international waterskiing events,” says Jose Miguel Diaz Escrich, Commodore of Hemingway International Yacht Club of Cuba.

For 10 years, the club has developed an interest in the sport, and the Waterski and Jetski Team has demonstrated its skill at Havana city and other Cuban towns.

Lagoon sailing season started at the end of November, with boats cleaned and repaired for a bout of fleet racing.  Club plans also included a mega yacht challenge in LSR boats on Friday, December 7 in connection with the MYBA charter yacht exhibition, to give mega yacht crews an opportunity to race under the club’s auspices.

As All at Sea was headed to print, the club reported that 23 boats participated in the 4th Course de L’Alliance and expressed its appreciation “to sponsor Marina Fort Louis and in particular to regatta organizer Herve Dorvil for the outstanding event that was put on in the weekend of the 23rd, 24th and 25th of November.” Budget Marine Too, a Melges 24 skippered by Andre Scarabelli, took first in CSA 2 & 3 Overall racing class followed by Carib HiHo (Frits Bus) and Panic Attack (Jan vanden Eynde.)

“This event shows that collaboration like that between the SMYC, St. Barths Yacht Club, the Anguilla Sailing association and Yacht Club Fort Louis is not only possible, but also a highly successful formula for turning out a great regatta,” said club officials. “Besides the destinations, the sailing also turned out at a high level of competition and close racing was experienced in all classes.”