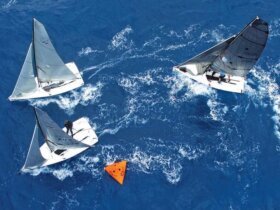 The Antigua Yacht Club will be hosting the Annual Round the Island Race the weekend of January 22nd – 23rd, 2005. It will be opened to racing class, cruiser/racer and cruiser class.The record has been by the 72 feet Maxi “Mistress Quickly” and is currently held by Donald Tofias’s W76 sloop “White Wings”.

The 10th New Year’s Eve day race/parade around the island was co-organised by Mischievous Captain Mark DelGiudice. The parade, which has now been registered with the French Government to become an official event, sees big boats such as Endeavor and Mari-Cha rub shoulders with the more modest local craft.

The Hemingway International Yacht Club invites all Canadian yachtsmen to participate in Nautical Week from March 13 to 19, to mark the 60th anniversary of Cuban-Canadian relations.

Four of the local J-24s took part in November’s Carriacou sailing series and the sail training programme is up and running again. The St Lucia regatta runs from January 13 to 16. This year, Mount Gay comes on board as a new sponsor. Competition will be in Racing, Cruising and J-24 classes. For more info, contact Tricia, regatta secretary,  (758) 458 2083.

A Sunday morning round the rocks and round the buoys race is scheduled for January 16. Racing should last about 2 or 3 hours, to be followed by lunch and prize giving at the yacht club. The club’s Spinnaker Grill holds its Happy Hour from 4pm to 5.30pm and the bar and restaurant are also open for business, although the kitchen is closed on Tuesdays.

This year is the 30th anniversary of the BEYC, in Virgin Gorda’s North Sound. As part of celebrations (scheduled to run throughout the year), a GPS handheld unit Treasure hunt will take place January 8-15, with teams sailing round the BVI looking for clues.

The Bared PR International Regatta will be held March 11 to 13 – the dates altered this year from the usual Easter weekend to put the regatta in between St Croix’s International regatta and St Thomas’ Rolex. Racing will take place in J-24, racer-cruiser, and beach cat classes.