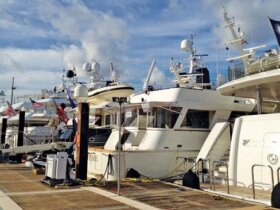 In December, Commodore Jose Miguel Diaz Escrich welcomed Carrie A. Dean, coordinator of the international Blue Flag campaign sponsored by the Foundation for Environmental Education (FEE). Dean presented information on the campaign, with strong participation by members of the tourism sector and other institutions linked to the business of beaches and marinas.

FEE is an international, non-profit, non-governmental organization based in Denmark that promotes sustainable development through environmental education. One of FEE’s five programs is Blue Flag, a voluntary eco-label awarded in 2005 to more than 3,100 beaches and marinas in 34 countries. Nine beaches and two marinas in the Caribbean carry the Blue Flag label in the Bahamas, Jamaica, Dominican Republic, and Puerto Rico.

The world’s oldest regularly-scheduled ocean race, first sailed in 1906 from America to Bermuda, celebrates its centennial this year with the Newport Bermuda Race 2006 starting June 16. Approximately 200 boats, ranging from 36 feet to 100 feet in length, are expected to brave the challenging 635 nautical mile course.

“The great thing about the Newport Bermuda race is that every one is different,” said Gary Jobson, a resident of Annapolis, Maryland who has competed in the race seven times and will serve as the event’s Honorary Chair. “It’s no small feat getting to Bermuda, and the reward itself is being there on that friendly, subtropical island out in the Atlantic Ocean.”

From the beginning, the Royal Bermuda Yacht Club has hosted the finish and festivities after the race. Most boats will dock at their marina, and guests are welcome at the club to view these magnificent yachts and sample a gosling’s Dark ‘n Stormy at the Terrace Bar. In the evenings, the yacht club will turn into a disco-dancing party scene.

Sailing in Bermuda waters continues on Friday, June 24 for 40 or 50 of the ocean race competitors and other Bermuda boats in the Royal Bermuda Yacht Club’s Anniversary Regatta.