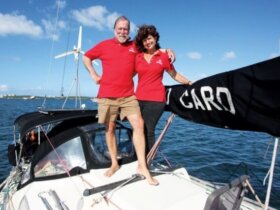 Rallying For and Against Rallies

Antigua
Saturday, June 5, the National Sailing Academy (N.S.A.) of Antigua was launched for students eight to 18 at a Nelson's Dockyard ceremony that was opened by Elizabeth Jordan, Commodore of the Antigua Yacht Club and President of the N.S.A.

Jordan thanked sponsors who made significant contributions to help start the Academy, among them the SuperYacht Cup which provided startup funding, and yachts that each funded a new Optimist dinghy: Ashanti IV, Concise, Lee-Overlay, Liara, Ran and Sojana.

The Academy is removing logistic and financial barriers to Antigua youth entering the marine industry. Children who select sailing as their sport of choice will be transported once a week to Falmouth or Jolly Harbour for the programme. Every yacht which docks in Antigua each season will be asked to make a donation of $1.00 per foot of overall length. Among the board members are Pippa Pettingell, who runs the Youth Sailing Programme at Jolly Harbour, Olympian Karl James, Senior Instructor at the Antigua Yacht Club, John Duffy, President of the Antigua and Barbuda Marine Association, and several others. More sponsorships are welcome: www.nationalsailingacademy.org.

Royal British Virgin Islands Yacht Club
Orion from Puerto Rico, skippered by Fraito Lugo, won this year's Quantum IC24 International sailing regatta hosted by the club June 19 and 20. Racing was challenging this year, owing to inclement weather. Courses had to be re-set several times as a result of changing wind-directions, and wind speeds varied from anything between zero and 25 knots!

Boat entries came from Puerto Rico, the US Virgin Islands and the BVI. Second place went to BVI boat Sea Hawk, skipper Mike Hirst, and third place to St Thomas boat Brand New Second Hand, skipper Chris Curreri. Race organizer Guy Phoenix, said, "We were delighted that so many boats entered the regatta, particularly given the bad weather. We're hoping that next year we can build on the success of this year's events and see even more countries represented for this IC24 class." He thanked sponsors Quantum Sails for their support. www.rbviyc.org

St. Lucia Yacht Club
The 4th National Optimist and Laser Sailing Championships were held June 11 and 12, hosted by the St. Lucia Yacht Club. This year's new sailing class, Benjamin Optimist, had eight participants aged six to 10, newcomers to the sport. Nine Optimist Class competitors, aged eight to 14 years, fought through variable conditions on the water on Saturday, including extreme winds of 23 knots and heavy rain. All showed great determination, perseverance and sailing skills both days. The laser classes had a record 10 competitors, the biggest fleet ever.

St. Lucian sailors are traveling this summer to compete: Stephanie Devaux-Lovell, Luc Chevrier, Marcus Sweeney in the North American Optimist Championships in Kingston, Ontario, Canada; Jasia King for her second time in the VOLVO Youth World Laser Championships in Istanbul, Turkey and Stephanie Lovell with the St. Lucia team to the Youth Olympic Games in Singapore in August.

St. Croix Yacht Club
Junior sailors Billy, Kyle, Lillian, Madeline, Challis and Sam scheduled sunset sails with rum punch for a modest fee each Friday in June and early July, with a goal of raising $2000 to attend the Premier's Cup in Tortola in July. The young sailors employed the club's Rhodes 19, Yellow Bird, in this effort targeted at attendees of the yacht club's popular Friday Happy Hours.

To contribute news from your local yacht club or sailing association, please write to [email protected]. Deadlines are six weeks prior to the publication date.

Two things blow my mind—one is that anyone who reads me regularly thinks I have sense; and, two is that the arrangement of my vessel would make sense.

Green Cruising with a Mix of Alternative Energy Sources

With the right mix of alternative energy sources you can save fuel, keep your carbon footprint low, and mother earth a tiny bit healthier!