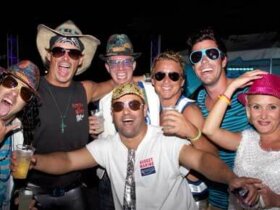 The inaugural World ARC cruising fleet, comprising 37 yachts from 13 nations that set off from St. Lucia in January 2008, returned to the island at the end of March 2009—15 months and 23,000 nautical miles after the World ARC commenced.

Participants were warmly welcomed to The Marina at Marigot Bay the weekend of March 26 to 28 before the final leg of the World ARC. "We loved it here in Marigot Bay so much when we visited in December 2007 that we had to come back," said one of the ARC participants.
Activities included a local food tasting on Thursday evening in the Marina Village and a barbeque night at Discovery at Marigot Bay.

The World ARC fleet then gathered together for one last time for the 10 nm journey up from Marigot Bay to Rodney Bay, St. Lucia and the official finish. A Parade of Sail took the yachts to their final destination at Rodney Bay Marina, where their adventure began back in January 2008.

Falling in line-astern, 17 circumnavigators were joined by local yachts from the St. Lucia Yacht Club to shepherd the fleet around Castries Harbour and then across a symbolic finish line laid in Rodney Bay. Each yacht was greeted by loud hoots and cheers from well wishers, signifying the end of their round the world voyage.

The World ARC yachts visited 16 countries and several off-lying dependencies, 33 official stop-over ports and many more islands and anchorages around the globe. Crews benefited from the safety net and camaraderie of the rally on open ocean crossings while being able to independently explore in cruising areas, including remote islands and anchorages in the South Pacific, Indian and Atlantic Oceans. A team from event organizers World Cruising Club (WCC) was with the rally in each stopover to provide assistance.

For the final ocean passage, yachts sailed from South Africa to Brazil via St. Helena. The organizers’ choice to route the rally via South Africa proved timely when pirate attacks off the coast of Somalia caused Lloyds of London to withdraw insurance cover in the Red Sea.

As the sun set over Rodney Bay, crews gathered at the beachside Royal St. Lucian Hotel to mark the end of the rally in style. Guests of Honour at the celebration included Laurie Barnard, Chairman of the St. Lucia Tourist Board, and James Hepple, Consultant to the Tourist Board. Dr. Hepple thanked the skippers and crews for helping to make St. Lucia a premier centre for yachting tourism, and congratulated them on their achievements. The skippers and crew were then welcomed on stage by Andrew Bishop, Managing Director of World Cruising Club, who presented each with a commemorative plaque, a trophy and certificate of achievement to mark the voyage around the world. The final prize of the evening was awarded to David Holliday of Kealoha 8 (Oyster 72), for winning the overall competition within the rally.

On behalf of the participants, Holliday said, "World ARC has been a wonderful experience and I would not have done this voyage without being a part of the rally. I want to thank World Cruising Club for helping me achieve my dream."

The next World ARC will sail from St. Lucia in January 2010 and already has 33 yachts from 12 nations entered. The rally will follow a similar route to 2008, circumnavigating via Panama, Australia, South Africa and Brazil, avoiding South East Asia and the Red Sea region.

Routing and weather advice is provided for yachts at sea and daily positions are tracked via the rally website. World ARC yachts are also eligible for free entry in World Cruising Club’s ARC and ARC Europe transatlantic rallies for those wishing to start and finish in Europe.

The rally is open to monohulls with a minimum LOA of 40ft (12.19m), and multihulls between 40ft (12.19m) and 60ft (18.29m). Minimum crew requirement is two people onboard each yacht. A range of safety and communications equipment must be carried including, but not limited to: a life raft, EPIRB, offshore flare pack, two lifebuoys, two manual bilge pumps, emergency steering and emergency grab bag.