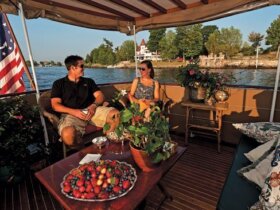 The Do’s and Don’ts of Chartering your Boat

In May of 1971 we joined our very close friends, Doc and Renee Gholz, on Flying Spray, their Alberg 35-foot sloop, from New Orleans to make the 450- mile passage to the Dry Tortugas, then to the Florida Keys, Nassau in the Bahamas and back to Florida. The Flying Spray did not have a chance to fly, nor was there hardly ever a drop of spray on her decks because there was practically no wind. Fortunately she needed little wind to neatly tiptoe through the waves. We never used the engine except to charge the batteries. Nor did we have any deadlines but could enjoy the delightful days of slow, smooth sailing.

But would most people do that today? No way! The sails would remain furled, the engine running along with the generator for air conditioning and videos. But on a small boat, it is just you with your little teacup of a boat on a vast sea moving along at the whim of the wind.

Flying Spray was like a small hors d’oeuvre on an enormous silver tray. Looking down into the sea, we saw fathoms of nothingness broken only occasionally by a wandering fish or flotsam. It was not lonely but serene and one’s troubles seemed to fade away. Our watches were sheer pleasure. We read books and had delightful conversations that come only with the company of close comrades.

That all changed when a young Cattle Egret (Bubulcus ibis) appeared on the nearly slack jib sheet. Stupid bird! That’s no place to land, I thought. And what are you doing out here so far from land anyway! The Cattle Egret is almost never found in the water except to drink.

It was clear that this egret was exhausted. With great effort it flew onto the deck and just stood there as if in a daze. Being a chef by trade, I instantly wanted to feed it. But what would it eat? There were no handy insects around and no fish either.

Or was there? Many little islands of sargasso weed drifted beside us. Might there not be fish in those? We decided to find out. Now our watches became more interesting. Whenever we saw a likely island, we steered for it and the bowman snagged it with the fishing net and dumped it on to the deck. The egret, now dubbed Gordon, would pick over it and snatch the Sargasso Fish and other tiny fish. We put out a cake pan of fresh water for him which he quickly stood in. Now he had his “swamp” to wade in.

It became our mission to help Gordon survive and we even carefully cut off the “trigger” of the tiny Trigger Fish in the weed so that he could swallow it. When we got close enough to Loggerhead Key in the Dry Tortugas we hoped he would be strong enough to fly off to the mangroves where he could find the insects he so desperately needed.

And Gordon did fly off to find many of his comrades on the tiny spits of land. When he was gone, we kinda missed the little fella.

Jeannie Kuich, once a long-time charter chef in the Virgin Islands, has been writing monthly columns for the Daily News since 1985 and periodic columns for Caribbean Boating, Nautical Scene, St. Thomas This Week and Cruising World magazines. Jeannie is the author of “Soap Operas of the Sky”, the only stargazing sky guide for the Caribbean.

29 years ago a group of Alice Kelly’s friends came together to honor her memory and financially assist the Outer Banks Cancer Support Group. Today the “Alice Kelly” is one […] 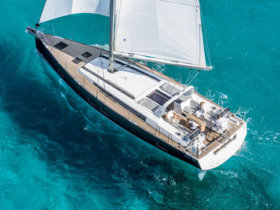 Pent-up demand after a year or more of pandemic sheltering in place is driving yacht charter bookings, according to NauticEd