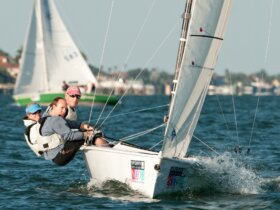 The back-to-back timing of the International Rolex Regatta and BVI Spring Regatta & Sailing Festival offers sailors an excellent opportunity to enjoy nine days of racing by day and rum-and-reggae parties by night.

Donnybrook and Equation are already onboard for the 2008 International Rolex Regatta, set for March 28-30, and hosted out of the St. Thomas Yacht Club. “On-line entry went active around the first of the year and entries have been coming in,” says John Sweeney, regatta co-director. “We want and expect a big turnout from all local boats from racers to cruisers to classics and large multi-hulls.”

New this year, St. Thomas Yacht Club will welcome yachts sailing under the IRC rating rule as well as those sailing under the CSA (Caribbean Sailing Association) handicap rule. The move—a first for the regatta—is intended to make it hassle-free for racing sailboats from the U.S. and Europe to compete. IRC is the only rule endorsed by ISAF (International Sailing Federation) as an international rating rule and accepted throughout the world. Both Donnybrook and Equation will sail with an IRC handicap.

“We are encouraging a larger international fleet,” says Sweeney.  “To date, we’ve had positive feedback from U.S. and European boats.” Deeper-draft IRC boats can now be accommodated by the new Yacht Haven Grande’s docks.

CSA certificate holders are eligible to obtain an IRC rating as well. “We encourage owners to investigate the requirements, and local measurers can assist in the process,” says Sweeney.

In addition to handicap yachts, the International Rolex Regatta caters also to Beach Cats and one-design sailboats of 24 feet and longer—the most popular being the home-grown IC24, a fleet which always has an impressive turnout.
In other developments, Sweeney says, “We’re moving the race to and from the Charlotte Amalie harbor to the first day of racing on Friday, with windward-leewards on Saturday. Sunday’s course will remain the same.”

The Notice of Race (NOR) and on-line entry are available at www.rolexcupregatta.com. The web site also has helpful travel information such as lodging options in St. Thomas and passport and visa needs, as well as a link to a promotional video that will entice any sailor to come compete:  www.t2p.tv/viewers/irrpromo08/

Entries are also pouring in for the BVI Spring Regatta & Sailing Festival, set for March 31-April 6 and presented by the Nanny Cay Marina.

Judy Petz, regatta director, says, “Our race division is leading the entries with many returning and new boats such as Yani, a Marten 49. It is anticipated that a fleet of 20+ IC24’s will be on the one design course.”

Petz adds, “We have a number of boats that are CSA rated and IRC rated coming from the U.S. The BVI Spring Regatta has been part of the IRC Gulfstream series for the past three years and we welcome those who are coming down to race the Caribbean circuit.”

The regatta will again feature three well-positioned and challenging race courses, ready for the 18 classes of boats that range from 14-foot Lasers to 70-plus-foot sleek ocean racers.

“We will have the umpires on the IC24 course instantly adjudicating any situation that could potentially result in a protest,” Petz explains. “The umpires, almost all International Umpires, have power granted to them by Appendix Q and the organizing authority, to impose a two turn penalty if they witness an infraction and if the offending competitor chooses to wait for the umpires to rule rather than initiating one penalty turn on their own.”

As for on-land, “We will have a larger bar at Nanny Cay, with more room for sailors to sit along the beach area and enjoy an assortment of International cuisines. The band line-up will feature music playing from noon to midnight—a perfect opportunity for dancing the evening away under the Caribbean moon light!”

The Notice of Race (NOR) and on-line entry are available at www.bvispringregatta.org. The web site offers a variety of other helpful information, including a promotional video to whet the appetite, found at: www.youtube.com/watch?v=e0fE307AGGc

If the International Rolex Regatta and BVI Spring Regatta & Sailing Festival individually aren’t enough to compel sailors to come and compete, Virgin Islands Race Week (VIRW), presented by the U.S. Virgin Islands Department of Tourism, surely will, with its own prizes. The top CSA yacht will receive a week for two, compliments of the Bitter End Yacht Club, in Virgin Gorda.

The top IRC yacht will collect a week’s complimentary stay at the new Marriott’s Frenchman’s Cove, in St. Thomas with accommodations that sleep up to eight. Certificates for dinners at local restaurants are also part of the prize package.

“The response we’ve received to date has been fantastic. Sailors are clearly excited about Virgin Islands Race Week and we expect it to grow rapidly over the next few years,” says Petz.  Bill Alcott’s Andrews 68, Equation, is among the initial VIRW entries.

Sailors can race their own yachts or charter. ONDECK Sailing is offering specially discounted rates to charter its Volvo 60, Farr 40s and Beneteau 40.7s for VIRW.