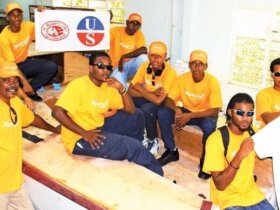 We Built a Race Boat!

The first day of the seventh Youth Sailing Curacao Championships was blessed with exciting racing conditions and lots of sunshine. In total, 70 kids between the age of seven and 16 sailed at the Spanish Water or at sea for their club trophies.  The three morning races at sea tested the Optimist and Splash sailors’ equipment and fitness. The northeast trade wind reached up to 30 knots with steep high waves. Rescue boats towed in several dinghies with broken masts and other equipment damage. At the second day the winds were back to normal with nice breezes and gusts varying between 20 to 25 knots.

Ard van Aanholt (14) learned sailing in the strong Curacao winds and showed again that he likes the strong breezes. On the second day Ard added two bullets to his already impressive first day with three first places and two thirds and secured his fourth YSCO title. After the first five races, younger brother Just van Aanholt was tied in first place with his brother. In the final ranking the brothers were only two points apart. Last year’s winner Eugene Hendrikx finished third. Most remarkable was that the top eight of the fleet all finished within a minute in most races.

Argentinean coach Martin Jenkins, a two time Optimist World Champion, surely has been able to raise the level of youth sailing in Curaçao. The 15 “Team AHO” Optimist sailors are working hard to be prepared for the big challenge, the Optinam 2008 (www.optinam2008.org)  right in the Jan Thiel bay, their home water.

In the Splash class Dennis van Berg dominated the field. Only in the first race Philipine van Aanholt, top girl, was able to win a race. The Splash proved to be physically very demanding with these strong breezes for the teenagers. Van den Berg showed his class and mastered to secure his first YSCO champion title even with having to drop one race for equipment failure. Van den Berg and Van Aanholt now have their minds set on the Open Dutch Youth Championships in May. Furthermore a team of five AHO sailors will represent Curacao and the Netherlands Antilles at the Splash Worlds in Portugal in July.