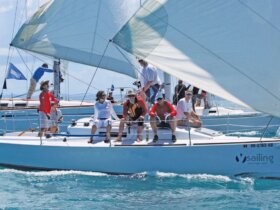 All the pieces were in place today for an exciting finale to determine the 2009 ICSA/Gill National Championship on San Francisco Bay, from warmer air and sea conditions, to good breeze, to a close contest between the two frontrunners for the title – St. Mary’s College (St. Mary’s, Md.) and Yale University (New Haven, Conn.) – who were separated by just seven points with only eight races left to sail. When all was said and done, after 36 races over three days contested by 123 sailors from the most competitive 18 schools in the nation, the St. Mary’s Seahawks had won the title for the third time in school history.

The lead then took another swing as St. Mary’s regained ground over Yale after the first set in B-Division put them ahead 157 to 166, before a photo finish in A-Division’s final race of the day, during which Yale and St. Mary’s rounded every mark 1-2, went to Yale and moved the Elis back into the lead 169-172. It was now down to B-Division to settle the score.

“It was a little too exciting for the coaches,” said St. Mary’s coach Adam Werblow joking that his heart had to be restarted a few times. “Our B-Division team had a rough start in the second-to-last race, but then won the start in the last race had a clear lane and were able to go fast. Yale battled really hard. We thought we could hang with them in A and beat them in B. We were blessed. We brought seven, all seven sailed and they worked really hard, prepared for this venue and did enough right to win.“

Rounding out the top five finishers were Georgetown University (Washington, D.C.) in third with 231 points, followed by Old Dominion (Norfolk, Va.) with 262 and Boston College (Chestnut Hill, Mass.) with 315.

The Format: In the ICSA/Gill National Championship each school fields a separate A and B division team with, weather permitting, each division sailing 20- to 30-minute fleet races in rotation. A team’s final score is determined by the combined results of its sailors in A and B divisions. Stanford University co-hosted the championship with St. Francis Yacht Club, with racing taking place from the club utilizing Stanford’s fleet of FJs.