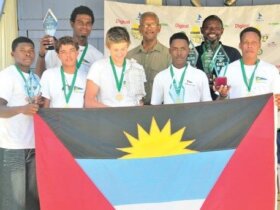 Six junior sailors from the U.S. Virgin Islands traveled to three major sailing events in Europe this summer, representing the territory and St. Thomas Yacht Club in the International 420 (I-420) two-person dinghy.

This ambitious summer of sailing started off with Alex Coyle and Alec Tayler and Nikki Barnes and Ian Coyle competing at Kiel Week in Germany, from June 24 to 27. Light winds created challenging conditions, with only five races completed out of a planned 11 for the regatta. Coyle and Tayler finished 17th and Barnes and Coyle 82nd in the 204 boat fleet.

The team then attended a week-long clinic in Barcelona practicing with Spain's top I-420 sailors.

Next stop was the Volvo Youth Sailing ISAF World Championship in Istanbul, Turkey, sailed July 8 to 17. Only sailors 18 and under can participate in this event. There are six classifications of boats and the I-420 is one of them. Only one boys team and one girls team per country may compete. Coyle and Tayler represented the Boys division for the U.S. Virgin Islands while Barnes and Agustina Barbuto raced in the Girls division. Like Kiel, extremely light shifty winds proved difficult for all sailors. Only three races were completed during the first two days of racing. The boys had a difficult start under these conditions and, while the girls performed better, they were carrying a DSQ from the first race and they hoped to get in enough races so they could drop this worst score. In the end, the Coyle and Tayler finished 25th out of 36 and Barnes and Barbuto 14th out of 28.

Finally, the team traveled to the I-420 World Championships in Haifa, Israel, held July 25 to July 31. Coyle and Tayler sailed in the Open Class as did Ian Barrows and Ian Coyle, while Barnes and Barbuto competed in the Ladies Class. The Virgin Islands sailors got off to a great start with all three teams making it into the top half of their respective fleets, which meant that they all qualified for the Gold Fleet. Coyle and Tayler qualified by placing 26th out of 83 boats, Barrows and Coyle with a 17th place finish, and Barnes and Barbuto an 11th place finish in the Ladies Division. Great conditions meant the race committee was able to run all 11 planned races in the Finals. Ultimately, Coyle and Tayler finished 19th/83, Barrows and Coyle 12th/83 and Barnes and Barbuto 13th/74. This is a spectacular finish in a Worlds competition, especially given the fact that the ages of the Virgin Islands I-420 team members ranged only from 14 to 17 years. Here's to a bright future for the team!

The US Virgin Islands' I-420 Team was coached by Agustin 'Argy' Resano and chaperoned by Heidi and Tim Coyle.