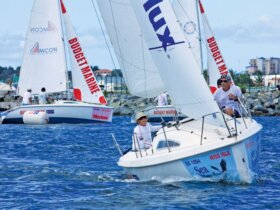 It is only natural that St. Martin, also known as “the friendly island,” would be host to a regatta named La Course de l’Alliance, an event aimed at fostering friendship and camaraderie among St. Martin (both French and Dutch sides), St. Barth and Anguilla. Taking place the last weekend in November, the event, now in its sixth year, was mostly a local affair, with 20 boats entering across four different classes – racing, racing/cruising, cruising, and multihull.

Every day the boats sailed a single race, a fairly direct route from one island to the next, the goal being to showcase each of the three islands over the course of the weekend. The distances between islands were short enough that with a little luck and a little breeze most boats arrived at the destinations by mid-afternoon, giving the competitors the chance to do a little exploring, or to just enjoy the fresh scenery of a new anchorage each night between races.

The boats left from the Sint Maarten Yacht Club on Friday, November 27th and sailed through intermittent rain and shifting breeze to St. Barth. They stayed overnight in Gustavia, then headed for Sandy Ground in Anguilla on Saturday morning. Again, the breeze was lighter than many had hoped for, but with live music at the beach bar Johnno’s Place, and a 70s theme party at the Pump House just across the street, the sailors found lots to do in the small beach town, which serves as Anguilla’s main harbor.

20 boats may be considered a fairly small regatta, and size may be an issue to some, but the organizers of La Course de l’Alliance could care less about the number of entrants. When asked about whether he thought the regatta had grown much in its six years, Robbie Ferron, Commodore and founder of the St. Martin Yacht Club replied, “I’m not interested in bigger or smaller. I’m interested in good and bad. Size is not the point. Organizing a regatta is really about creating an experience for the racers.”

As Ferron said, “If you can have a good regatta for 20 people, isn’t that what you want to do, rather than give a regatta for 1000 people and treat them all badly?” Well, mission accomplished. Each island played perfect host as the backdrop to a wonderfully run event, which is no wonder, as many of the organizers, including Ferron and Heather Tackling, are the same people who organize the Heineken Regatta, which will take place in Sint Maarten in March and is the largest regatta in the Caribbean.