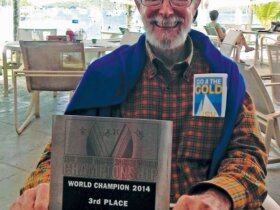 The Joy Of Living: That’s the theme of the 2009 Captain Oliver’s Regatta, with racing scheduled for May 16 and 17, on the island of Saint Martin. Olivier Lange opted for this theme to celebrate the fifth edition of the regatta he initiated: “We all need some joy, especially in these difficult economic times; and the joy of living is a sentiment we can share with friends!” he declared with gusto at a luncheon held at his restaurant at Captain Oliver’s Resort in Oyster Pond, where he launched this year’s regatta with members of his organizational team. And since there’s no point in replacing a winning team, Hervé Harel, president of Captain Oliver’s Yacht Club, remains as president of the regatta, and Stuart Knaggs as race organizer.

Last May, 40 sailboats competed in the 2008 edition of Captain Oliver’s Regatta, with Frits Bus, aboard his Melges 24 “Carib Beer Team” taking fist place, at the head of all classes combined. Happy about the massive participation in the regatta and its success, Olivier Lange publicly announced during last year’s award’s ceremony, that he would do all it takes in organizing the next edition, in 2009. And here we are already: sailors and friends, take note, it’s time to mark your calendars for the regatta on May 16 and 17, as well as the opening night party on Friday, May 15.

Since 2005, the number of boats has increased every year for Captain Oliver’s Regatta, which since its debut has attracted sailors for its warm, friendly ambiance.

Berths at the dock are free, three evening parties are on the schedule beginning on Friday, May 15, and participants receive great prize packages.

The boats are divided into six categories:

On Saturday, May 16, the boats will sail around Saint Martin in a counter-clockwise direction, starting out from Captain Oliver’s Marina. On Sunday, May 17, the competitors will battle on the waters between Oyster Pond and Ile Fourche.

Additional information about the regatta can be found at http://www.coyc-sxm.com