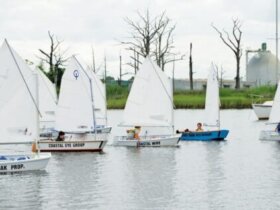 The southeast coast of Brunswick County, North Carolina includes several barrier islands such as Topsail Island, Holden Beach and Oak Island. But anglers can stack the deck in their favor by surf fishing at Bald Head Island since it juts out into the Atlantic Ocean. Fishing further out means a greater variety of species can be encountered including flounder, jacks and mackerel.

The uniqueness of Bald Head Island begins with the ferry ride from Southport. The triangular shaped island is situated with its main beachfront facing south, with Cape Fear River to the west and the east beach extending out into the Frying Pan Shoals. Only golf carts are allowed on the island, adding to the charm.

This triangular formation means that no matter which direction the sea island breezes are blowing there will always be a protected section of beach to fish from. The shoals at the point where East Beach meets South Beach offer rough water fishing for bluefish that blitz through the surf zone during their annual October bluefish bonanza tournament.

The West beach tempts anglers to cast toward the Cape Fear River and fish for red drum along the dropoffs that are a characteristic of this section of beach. A valid N.C. fishing license and some cut bait are part of the surf fishing at bald head island essentials along with surf spikes and a tackle box filled with lead sinkers and fishing hooks. Slot limits apply for red drum and it’s easy to practice catch and release after skidding a bronzy redfish up onto the beach.

Getting your rods, cooler, and tackle box to the surf is easy once a wheeled surf cart is obtained. Typically the cart has several rod holders, fat tires made for rolling through sand, and will hold a large cooler packed with bait, drinks, and tackle. These carts take the work out of moving between your car and the fishing hole, or moving up and down the beach to try different spots.

The fall offers perhaps the best surf fishing of the year since the water remains warm while the air temps begin to moderate. Healthy schools of redfish cruise the beach and anglers can use multiple rods to increase their chances for success. The action can heat up quickly and anglers are smart to keep a keen eye on their rod tips for the early signs of a strike. A popular sentiment goes, if you’re lucky enough to be at the beach, then you’re lucky enough; just remember to add surfcasting to the mix.