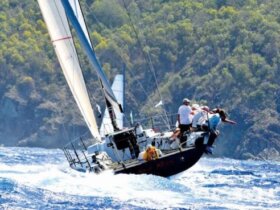 At late September’s U.S. National Match Racing Championship held at Seawanhaka Corinthian Yacht Club in Oyster Bay, New York, it appeared to be a choice between previous year’s champions, Dave Dellenbaugh, Dave Perry or Brian Angel on who would take home the 2008 championship.

Three young collegiate sailors from St. Thomas Yacht Club, Taylor Canfield, Nathan Rosenberg and Cy Thompson, decided to crash the party. By the end of the event, they had won the respect of competitors, umpires, and all others present by qualifying to sail in the final four against some of the biggest names in US match racing.

The regatta began with 25 kt winds and heavy rain for the first two days but our local sailors braved the weather and in their first race, sailing in a boat they were unfamiliar with, beat Dave Dellenbaugh, four time America’s Cup skipper, right out of the box.

At the end of three days and19 races sailed it came down to the point they had to beat both Brian Angel, 2007 champion, Dave Perry, 2006 championship and another top contender to make the finals. The wind had dropped a bit and our local sailors had a new confidence level now being comfortable in the boat, so they went out and won all three races after most pundits had crossed them off their lists as possible finalists.

Unfortunately the final day of racing was called off as the wind dropped to nothing and the Long Island Sound became a milk pond so the semis and finals could not be completed. The St. Thomas Yacht Club team was the last to qualify so they ended the event in fourth place with Dave Perry from New York being named the winner.

At the awards ceremony the biggest applause was for the young team from St. Thomas who really were not considered a threat at the beginning of the sailing.

This event, called the Prince of Wales Trophy, is only open to 12 skippers from across the entire United States with eight qualifying through area quarter and semi-finals and four being chosen by submitted resume.

The VI team had to do it through the extremely competitive northeast and mid Atlantic areas. They started off very powerfully by going 15 – 0 at Larchmont YC to win the quarters in May and then on to Annapolis in June where an 11 – 3 record won the semis against teams with years and years of match racing experience. This win made them the East Coast’s entry into the finals to be sailed in Oyster Bay.

Taylor Canfield, the skipper, was asked what motivated himself and his crew to come on so strongly during the last few races. He first mentioned that he, Nathan and Cy had been racing together for so long and winning at the junior level that it was just the natural thing for them to do.

He also mentioned Carlos Aguilar, who was killed just a year ago by his St. Thomas home, saying “He was a mentor to me and many other young St. Thomas sailors and he introduced me to match racing and made me see the complexity of this type of sailing. A lot of what I do today is dedicated to my friend Carlos.”