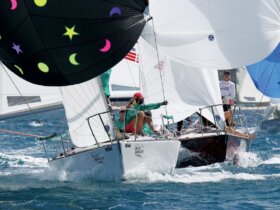 Not only is getting to the ICSA/GILL National Championship an achievement in itself – most recently the 18 competing schools had to make it through the semi-final round held in May in Boston – the race for the most coveted title in college sailing is the highlight of these sailor’s school year, and, in many cases, their college sailing career. So the fleet jumping the gun and effecting a general recall at the start of racing today could be chalked up to nerves, aggression, or just the excitement of getting the show underway. Under cloudy skies, racers who over-adjusted their strategy for the lighter than expected and shifty conditions earned attention from the judges who doled out penalties for kinetics, while three protests resulted in three DSQs (disqualifications) on day one of this three-day championship event.

The Format: In the ICSA/Gill National Championship each school fields a separate A and B division team with, weather permitting, each division sailing 20- to 30-minute fleet races in rotation. A team’s final score is determined by the combined results of its sailors in A and B divisions. Stanford University is co-hosting the women’s and coed championships with St. Francis Yacht Club, with racing taking place from the club.