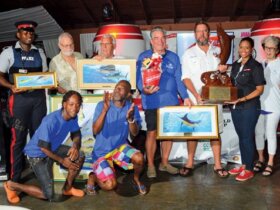 “We got lucky, especially the second day,” said Mike Lemon, captain aboard the Revenge.

Thirteen boats and forty-six anglers collectively released 11 blue marlin during the first day of fishing. Revenge jumped onto the scoreboard with two blue marlin releases by angler Jon Jennings. The duo of releases landed Revenge in a four-way tie for first place along with the boats H. T. Hook and Pescador from Puerto Rico and Four Seasons from Florida.

Day Two, the day of the Full Moon, Revenge anglers Jon Jennings and Colin Ross took off like gangbusters, with Jennings releasing four blue marlin – including a double header in the afternoon – and Ross one. The fishing frenzy continued for the entire fleet with 18 blue marlin released in total.

Day Three the fishing seemed to shut down in the aft of the Full Moon with only five releases for the fleet. Revenge, specifically Jennings, scored two more releases to end the tournament as Top Boat with eight marlin. Jennings seven releases earned him Top Angler and the prestigious Give’M Line Trophy.

Revenge, though Florida-based, is hardly a newcomer to Virgin Islands waters. Lemon was raised on St. Thomas and for the last eleven seasons has helmed Revenge for owner Sam Jennings and his son Jon, spending from May through October based in St. Thomas.

“We caught our first marlin for the season here in May. In general, it looks to be a better than average season in terms of number and size of fish. Of course its harder to tell now that there are more boats out fishing as the marlin season really goes into full swing,” Lemon said.

“Business kept Sam away from this tournament, but he’s happy we won,” Lemon said.

There’s a personal prize the Revenge crew looks forward to winning in the near future.

“We’re only nine fish short of our 1,000th blue marlin release for the boat. That’s something we’re all looking forward to,” Lemon said.

Over 500 species of fish swim in the seas surrounding the Caribbean islands. How much does it cost to fish offshore in the Caribbean

"It was not as easy a victory as some might think” said a smiling Captain Gaskill. “We had to work very hard and travel far for the win"