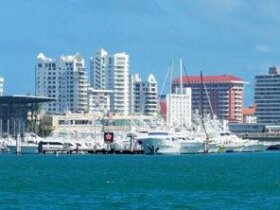 Puerto Rico’s Raul Rios is putting Optimist sailing in the Caribbean on the map this year. The 14-year-old earned the South American title racing in Rio de Janeiro in April. Then he added the North American title at the International Optimist Dinghy Association North American Championships, held July 8 to 14 out of Puerto Vallarta, Mexico.

“Like my prior victories, it was my consistency that was key to the final result and win,” Rios emailed, while preparing for the IODA World Championships in Sardinia, an event that followed on the heels of the North Americans.

About the final two days, where winds finally picked up above a whisper and shifted following a series of thunderstorms, Rios added, “When the wind changed, it stayed in the new direction, and that was a problem. You had to be sure which side to go or you would end up last. Being very aware of the wind shifts was very important, also good starts.”

One hundred and eighty-five junior sailors hailing from 20 countries—
and six Caribbean island nations—competed in the North American Championships. Strengthening the Caribbean’s reputation in the world of Optimist sailing, Puerto Rico won the Team Racing event and the U.S. Virgin Islands finished third, with the USA ending second.

IODA class administrator, Robert Wilkes, has this to say about the Team Racing, “This was the year in which the North American teams showed their growing maturity by capturing all three medals in a branch of sailing traditionally dominated in the Optimist Class by their southern neighbors. In a thrilling final, Puerto Rico beat USA 2-1, but even more significant was the victory of the U.S. Virgin Islands over Argentina to secure bronze. Given that just two years ago Puerto Rico was ranked 36th in the Worlds and the U.S. Virgin Islands 41st, this is a remarkable tribute to the development of Caribbean Optimist sailing.”

About this win, IODA’s Wilkes commented, “Maria José Cucalón from Ecuador ran out clear winner of the girls’ prize in sixth place over-all, but Nikki Barnes can be well pleased with her North American Girls title and a highly commendable 11th place over-all.”

Many of the Caribbean teams headed directly from Mexico for Sardinia, Italy, for the Optimist World Championships. These were sailed out of Cagliari July 22-August 2. (No results were yet available as All At Sea prepared to go to press.)