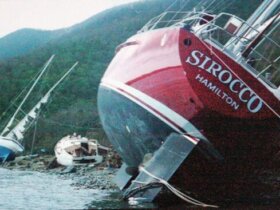 Memories of Hurricane Hugo – 25 Years On

Perhaps one of the most famous pirates or privateers—depending on your point of view—was Captain Henry Morgan. Originally from Wales, he operated with the unofficial support of the English Government, ransacking Spanish ports in the Caribbean, including Cuba and Panama, for 30 years. He was briefly arrested in 1672 but was later released and knighted and made deputy governor of Jamaica where, ironically, an anti-piracy law was passed during his administration. He died in Jamaica a rich and respected man.

Edward ‘Blackbeard’ Teach was a notorious pirate originally from Bristol in England who frightened his enemies by putting lit matches in his long twisted beard and hair, which smoked around his face giving him the appearance of a demon in battle. He terrorised Atlantic shipping between 1717 -1718 before he was killed in battle by pirate hunters.  It was said he was an imposing, fearsome figure always armed with pistols, knives and cutlasses which he wore strapped across his chest.  Despite his terrifying nature—or perhaps because of it—he ran a tight ship and was a successful pirate.

‘Calico Jack’ Rackham was almost as famous for his colourful calico shirts as he was for having two female pirates on board and Anne Bonny and Mary Read were said to be as fearsome and as violent as their male counterparts.