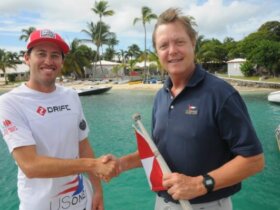 Puerto Rico’s premier yacht racing regatta will move to Palmas del Mar for 2010 and become the Puerto Rico Heineken International Regatta (PRHIR). Known as the Culebra Heineken International Regatta for the past five years, the venue change will welcome sailors to a brand new facility and re-introduce three days of top-notch racing from March 19 to 21, all in the beautiful waters off Puerto Rico’s southeast shores.

“We are excited about the plans for next year’s Puerto Rico Heineken International Regatta,” says regatta director, Angel Ayala. “Palmas del Mar is a beautiful facility. There’s a brand new yacht club and full marina where sailors will find everything they need.”

The 162-slip marina offers state-of-the-art facilities for yachts up to 200-foot. There is a restaurant, bar and grill, private lounge area, shower facilities, swimming pool, resort wear shop, convenience store, deli and much more on property and up to a dozen restaurants within walking distance of the marina. Shoreside accommodations at Palmas del Mar Hotel & Villas include rooms that will be offered at a discounted rate for regatta participants. In addition, there are villas for rent that sleep 12 and come with a private boat slip.

Regatta festivities will kick-off with a Captain’s Meeting on March 18. The fleet will race March 19, 20 and 21, with nightly parties and an Awards Ceremony on March 21.

“We’ll offer a mix of windward-leeward courses for the one-design and racing classes,” says Ayala. “There will be courses with reaches for the cruising classes. We may run a distance race to Vieques for some classes.”

“We will also host the Puerto Rico International Dinghy Regatta, a two-day event, on March 20 and 21,” says Ayala. “The Optimists, Lasers and Laser Radials will sail right off the beach.”

Entry fee for Optimist and Laser Classes; US $50.

The PRHIR marks the second leg of the Caribbean Ocean Racing Triangle, or C.O.R.T. Series, which begins February 19 to 21, 2010 with the St. Croix International Regatta and concludes April 2 to 4, 2010 with the BVI Spring Regatta in Tortola. At the conclusion of the three-race series, the first, second and third place boats in each of the classes – Spinnaker A, Spinnaker B, Racer-Cruiser, Performance Cruiser, IC24, and Jib & Main – will receive prizes.