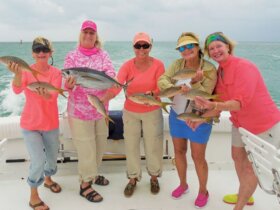 St. Thomas, U.S. Virgin Islands. Clive Mahabir only caught one fish in this year’s Wahoo Windup. Yet, Mahabir’s wahoo weighed in at a whopping 91.3-pounds or large enough to win him the top prize of $10,000 cash in this Virgin Islands Game Fishing Club (VIGFC)-hosted and Budget Marine-sponsored tournament held on Sunday.

“That was our first fish, our first strike of the day, and I just concentrated on getting the fish into the boat,” explains Mahabir, who was fishing aboard the Luhrs 40 Express, Mixed Bag, north of St. Thomas when he hooked the huge fish. “It was only after we got it onboard that we realized how big it was.”

Even though Mahabir’s wahoo won this year’s grand prize, it didn’t break the tournament record set in 2003 when St. Thomas’ Mike Kuszewski, fishing aboard the Black Pearl, reeled in a 94.1-pound wahoo.

Meanwhile, the catch of 8 wahoo earned Team Biscoe the title of Top Boat.

“We had a great time,” explains Dr. Byron Biscoe, whose 12-year-old son, Billy, caught three of the wahoo and 9-year-old son, Brett, reeled in one during his first-ever offshore fishing tournament. The team fished aboard DoubleHeader’s 35-foot custom center console. “When we weren’t catching fish, we were telling fish stories and really enjoying our day together,” Biscoe says.

Cash prizes were awarded to the anglers who caught the 10 largest wahoo.

Prizes were presented at an Awards Dinner at the VIGFC held Monday night.

A fleet of 12 boats from all three U.S. Virgin Islands with 62 anglers fished the tournament. Personnel from the Department of Planning & Natural Resources Fish & Wildlife Department, headed by director Roy Pemberton, Jr., conducted the official weigh-in.

“We had a great tournament and we invite everyone to come out and fish with us in future tournaments,” says tournament director, Paul Meyer.