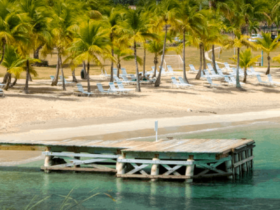 The sea spray settled barely a month after the BVI’s biggest boating event of the year, when it was time for the little boats to shine at the 7th annual BVI Dinghy Championships, raced May 10-11 out of Tortola.

Chris Watters, sailing coach at the Royal BVI Yacht Club (RBVIYC), says, “With 38 boats racing, and 42 competitors, this was one our biggest regattas to date, with attendance just under from last year’s record.”

The weather couldn’t have been more ideal. The breeze was steady and out of the southeast at 12 to 14 knots for most of the weekend. As a result, a total of 37 races were run.

The most exciting action happened in the Laser class.  Two-time Olympian Robby Hirst won the class sailing a Standard, but it was 2012 Olympic hopeful, 16-year-old Alec Anderson, sailing a Radial who was the only one to beat Hirst boat-for-boat in spite of the difference in sail area.

Anderson explains, “It didn’t take him (Hirst) long to get used to the boat again, so right away it was serious competition. Plus, his tactics are incredible. Then, when it was windy and I was able to keep up with him, the racing became lots of fun with some close reaching and tactics up wind.”

In the Laser Radial class, Anderson, the sole 2008 BVI Youth World Team member, battled it out for the top spot with the USVI’s William Bailey. The BVIslander was victorious and only allowed Bailey to beat him in two of the seven races sailed.

One of the other big highlights of the event, says Watters, “was the BVI’s Josh Morrell taking 11 firsts over 11 races in the popular Open Bic Class.”

The Open BIC, which received official class recognition by the International Sailing Federation (ISAF) in November 2007, is a 9-foot one-design dinghy that is gaining momentum around the world with large fleets in the United States, Italy, France and South America.

“I got clean starts and had good air. I worked the shifts and kept in front of the pack,” Hackstaff says of his win.

The 12-year-old wasn’t always leading. “One race, I was in front when my outhaul blew from its cleat. Because of this, I moved to the back of the fleet. But, I ended the race in 4th,” says Hackstaff. “Nicholas Gartner was my stiffest competition. I just beat him by one point overall, and I thought we had actually tied on points.”

Two sailors from the ‘Sailability BVI’ program, taught by Alison Knights-Bramble and Colin Bramble at the BVI Watersports Centre, saw their disabilities literally evaporate on the sea. In fact, one, Delroy Gordon, finished third in the competitive Laser 4.7 class.

Knights-Bramble says, “Sailing has become the only access these two and others that attend weekly the Sailability activities have to the outside world. They cannot read or write. One of the boys, though physically fit, is intellectually disabled, preventing him from earning a living once leaving school in any rewarding capacity. It is hoped that by the end of June 2009 both these boys will be valuable boat handlers and employed within the charter industry in the BVI.  Horizon Yacht Charters has been invaluable in giving the boys and opportunity to spend their work experience time with them.”

The two, Delroy Gordon and Glenford Gordon, and possibly other special needs sailors born in the BVI, will be competing at the next Special Olympic Summer Games in 2011 in Athens!