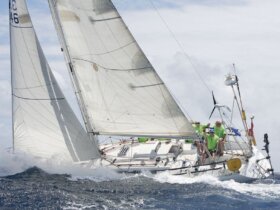 The Budget Marine Valentine’s Regatta from February 13 to 15, 2009 organized by the Jolly Harbor Yacht Club, consisted of two days of sailing in the Five Islands Harbor adjacent to Jolly Harbor with a fifteen-boat fleet.  It was a truly outstanding event where passionate sailors enjoyed bracing conditions on the water and great parties ashore. Winds were always stiff and above twelve knots but never got exceptionally strong.

The racing class was dominated by Jamie Dobb’s Lost Horizon (J122) sailed by a top-notch crew that made few mistakes. An indomitable Bernie Evans Wong followed him around the course at a fairly consistent distance to take second. The crew of Likkle Hugo went home when they decided they could not win the event like they had last year. The third place went to Paul Hoj Jensen and Sven Harder in the Dragon Compass Point.

The most competitive class was the Racer Cruiser class where Jerry Bardoe (Contention 33, Encore) managed to squeeze ahead of Tanner Jones’s (J30) Blue Peter by one point. A tough battle between Biwi Magic and Augustine ended with equal point with the tie of 18 points each going in favor of Biwi Magic (Geoffrey Pidduck).

The spirit of this regatta was best captured by the Cruising Class, in which a mixed group of passionate sailors drive a variety of boats around the course with great spirit and old sails. Coming out on top was Colin Jones sailing a Columbia 34 with great skill. David Milner sailed his Van der Stadt 30 into second place and Charles Kenlock took third place with the British Folkboat May. Winners of the Racer Cruiser and Cruising classes both received $1,000 in Micron 66 sponsored by Interlux.

Participants were pleased to welcome Jean Michel Marizou from Guadeloupe and a large crew who were pleased to escape the strike conditions on that island. The rest of the participants were Antigua residents in some form. The race officer Stephen Parry flew in from the UK to once again officiate this event. Additional prizes were Osculati binoculars, Leatherman Skeletools and Xantrex inverters, all available at Budget Marine.

The 16th edition of this event (the first was in 1993) continued a tradition of great regattas held in the flat waters and a great spirit of sportsmanship. The event is sponsored by Budget Marine whose oldest “branch” is in Jolly Harbour Antigua where they have served the growing yachting population since Jolly Harbour first opened up. Budget Marine is the Caribbean’s leading chandlery and has been operating in the Caribbean since 1982, and has nine locations throughout the Caribbean. www.budgetmarine.com.